Saturday 30th June
I met up with Mark at the lay by on Meio Common and up to the top we marched. Mark checked the wind speed which came out at 25-27mph and I launched the Wildthing to test the air. All was fine with good lift and turbulence only along the ridge line.

This was a good chance for me to maiden my latest acquisition, an X Models Whisper, 2m mouldie. Mark did the honours and gave it the old heave ho for me, just in case it decided it was going to do something unexpected. As it was, all was ok. I had to give it a few good clicks of down trim but that was all. Mark had told me not to do anything daft on this flight, I was a good boy though and made a few passes along the slope at altitude, tested the crow, which needed some elevator adjustment, and did a dive test, which showed the models CofG was ok with no tendency to pull out or tuck under. I tried a few loops, rolls, cuban 8's and half cuban reversals and she was fine, and very stable too.

As the day progressed Mark and I were joined by Chris and Pete, another flier from Pontypool. The winds increased to a whopping 44mph, which is more than I'm comfortable flying in, but I had to leave at about 2:30 anyway and left the guys having fun up there. 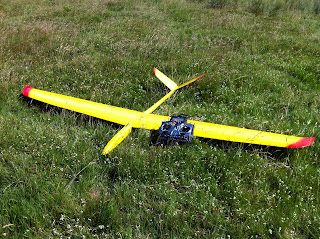 Sunday 1st July
Sunday morning and Mark and I met up at Meio Common but, the wind was more westerly and Meio is definitely a south westerly or north westerly, so we transferred my gear into Marks car and headed up to the Bwlch.

On arrival it was a bit drizzly and miserable but we walked the track towards Mickey's slope, expecting to have to walk the extra distance to Mickey's West, but as it happened the wind was on the nearer south westerly slope.

Mark launched his Polecat and me the Wildthing to test the air, which was still a bit drizzly. The air was a bit slow and patchy but we could see the edge of the dark clouds above us in the distance with what looked like brighter weather beyond.

It wasn't long before those dark clouds and the drizzle passed and that brighter weather was with us, and with this new weather, the wind picked up to a constant 30mph, which on Mickey's equated to a HUGE amount of lift. There was no maneuver we couldn't do from straight and level, point her up, and a moudie went ballistic. We would have benefited from having some ballast, which is something I must get for the Whisper, but the Whisper flew great, I'd got the elevator setting on crow just right, making landings much easier and I enjoyed getting used to flying this new ship.

Chris joined us in the afternoon and flew his Air One, and we all had fun flying the foamies, but the weather changed again and along came the drizzle, and the excellent flying conditions we had enjoyed changed again, so we decided to pack up and go home.

All in all, we had a cracking weekends flying and already we are looking forward to the next one. Now please, can we have some T shirt weather!
Posted by SteveH