The weather forecast was not promising – 8 to 9mph easterlies was not a good strength and neither was the direction. The two slopes on offer for this wind bearing was the Crest on the Bwlch, with it’s long trudge and rotor, or Manmoel, a slope that was new to me. I duly phoned up Mark to see if he was flying and he informed me that he was already at Manmoel and the wind was stronger than forecast – good news, as I had a correx MiG 3 to maiden.
I decided that I should cover all bases with the models that I took to this new slope, so loaded up the aforementioned MiG, a Speedo that I know is happy in both light and heavier winds and my trusty X-It EPP wing. I was told that the walk from the parking area to the slope would take a few minutes and that the cars would be out of sight, so I just took enough models that I could carry in one go. With SatNav to guide me, Manmoel was reached in about thirty minutes from my house and I duly unpacked and got suited and booted for the slope.
Mark was having a great time in what we estimated was a 15+ mph breeze with help from a little thermal activity. His new Baudis Pitbull was beating up the slope and gracefully pulling some huge aerials. Before too long we were joined by Chris, who himself had a model to maiden – the M60 EPP racer, finished in eye damaging fluorescent pink!  We were all set for a good day’s sloping.
I would love to report that both the maidens themselves were non-events with the MiG and the M60 flying straight away after launch, but only my MiG launched well off the slope, initially. Chris’ M60 was blown back after being thrown off, the inherent criticality of the tailless model’s C of G position combined with small elevon movements was always going to be a challenge to a successful launch. However after some tweaking of control surface centres, a second launch proved fruitful and both models were aerially trimmed and then landed to have their expos inputted (is that even a word?).
We all had a blast with the models we brought, Chris having his newish Needle with him which cuts a nice dash in the air and performed really well. The air was slightly bumpy but the day was bright and warm and the landing area huge and rotorless so it was a pleasant introduction to this new (to me) slope. By early afternoon we decide to call it a day and a satisfying drive back home in the sunshine was topped off with a chocolate thick shake from the local MacDonalds. Another good day on the slope for the A470 soaring massive - well, the handsomest ones, anyway.. 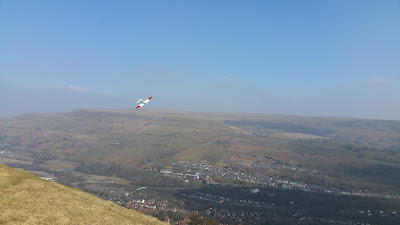 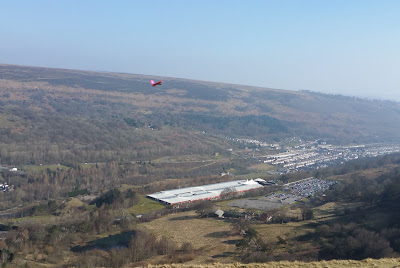 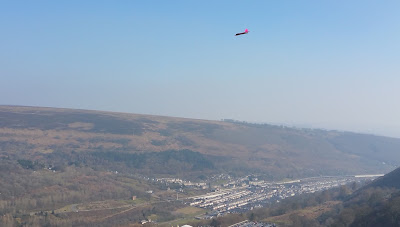