Well as it turned out, there's really not a lot I can say about this weekend, except that we stood around chatting for two days, or in my case, 1½ days as I left at 1:30pm on Sunday.

I arrived on Friday afternoon and took a drive along Marine Drive up to the tank track car park.

Standing on the edge of the cliff the sea was as calm as a mill pond, with mist hovering over it and there wasn't a breath of wind. In fact, the only sounds were the birds chirping and the tinnitus buzzing in my ears.

Saturday morning and I arrived on the "rock" at 9:45am and the conditions were much the same. People arrived, stood on the cliff edge, walked away, chatted to old friends, made new friends and laughed and joked. I felt sorry for the guys who had made the journey from Ireland, and I thought I had traveled a long way.

I left at about 4:45pm to go and watch the Wales v Slovakia game, but I did hear that the wind did pick up and some of the guys managed to fly for about an hour from 8:30pm.

Sunday morning and there was a very slight breeze which was coming in from the south, but very slowly it was moving around to the favoured south west slope, but still it wasn't possible to fly unless you had a real floater of a thermal soarer or, something with a motor up front. But the wind carried on swinging around to about north westerly and it didn't increase with speed, and then the rain came in a little after midday.

I stood around, in the light rain waiting to see if it was just an isolated, quick shower. And it probably was was, but I made the decision to pack up and make my way home as it seemed unlikely that the wind would pick up any strength to enable us to fly.

You can organise and organise but, there is one thing out of everyone's control, and that is the weather. It was a shame because there was a really good turn out with people having traveled the length and breadth of Britain.

The next PSSA meet is at the LLeyn Peninsula in August, but I doubt if I will be able to make that one, so I need to plough on and try to complete my A4 Skyhawk before the September meet. 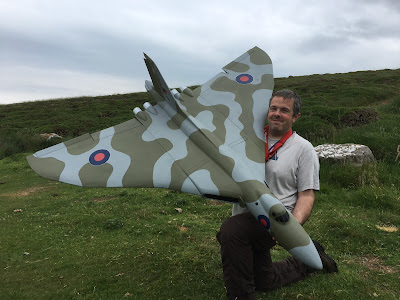 A few of the PSS models lined up on Saturday 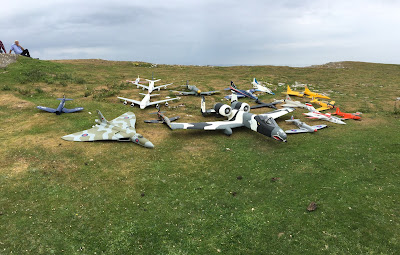 Until next time, happy flying.