Demise of the Moth?

Yesterday I headed up to the Bwlch for a foamie flying session, where I met up with Mike, Phil, Josh and Clive.

I was intending on checking the balance and control throws on the Genesis before next Sunday's Zagi Bash, but it was clear as soon as I launched it that the model was tail heavy, as the elevator was extremely sensitive, and it hit the ground with a thud, causing one of the elevon snakes to become unstuck from the metal snap link. So with the Genesis safely back in the car I grabbed the Moth to give that a fly.

Now in colder conditions I wear a pair of thermal, finger less gloves to keep my hands from getting cold, but they also allow me to operate switches etc easily enough. But after attempting to fly the Genesis, my fingers were frozen and I decided to put on a pair of proper gloves.

The launch of the Moth was fine, however it needed some up elevator trim adding as it constantly wanted to dive, and I attempted to do this by feel whilst keeping my eye on the model. But the next thing I knew, the model was diving and I had no control over it. I looked down at the TX and noticed that I'd only gone and switched it off by mistake and I then quickly turned it back on again, but by this time it was too late and the model had already disappeared below the ridge line.

I got as close to the edge of the ridge as I dare but I could see no sign of it, so there was nothing else to do other than drive down to the lay by close to the hairpin bend in the road and walk up the side of the slope to see if I could find it.

As I left the road, I found the ground was very deceiving. It was very long, tufty dried grass, but underneath it was full of deep holes, and boggy too, which you just couldn't see. All the while my eyes were scanning the slope for any sign of the purple and yellow colour scheme.

Now it had to be around the slope somewhere as it wasn't that far out when it went down, and the 25 mph ish wind would have pushed it closer into the slope, but I was having no luck where I was and so I decided to go back up to the top and then traverse the slope about 30 metres from the top, beginning at the far end where the access is easier.

The closer I got to the Wrecker part of the slope, the more difficult the terrain became and I felt I could go no further as this could compromise my own safety, and so I headed back.

By now I was wet and tired and ready to go home. Mike said he'd be taking his dog for a walk on Monday and so would have a look for it then, and today I have heard from him and he couldn't see it, so he's going to send a drone down for a closer look. 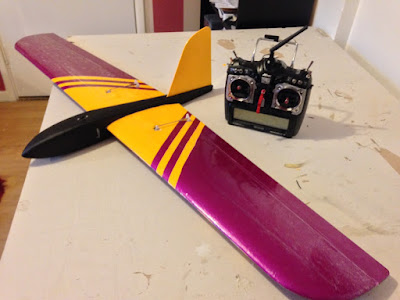