So I've been a busy boy and done a lot of Googling to find email contact addresses for the various Slope Soaring Association club secretaries around the UK.

Quite a few of the email addresses bounced back to me, but I did get a good response from a few clubs also, who promised to add Bwlchfest to their calendar.

I've also contacted David Ashby, who is the editor of UK model aircraft magazine RCM&E. David is going to add Bwlchfest to the magazines Going Places diary page and has also added it to his own calendar with the intention of joining us on the slope, which is great news.

The event has also been added to the BMFA and BARCS calndars also.

My next job, which I will probably do tomorrow, is to contact a few model suppliers to see if they would like to attend the event, maybe bring along a model or two to fly, or maybe the new Horus TX, something like that. So it could be good for them as well as for us.

Robin Lutzenberger has also been busy designing T shirts and caps which will be available for pre order with payment by PayPal, with a small number available to purchase on the day. Here i.s an example of what might be available 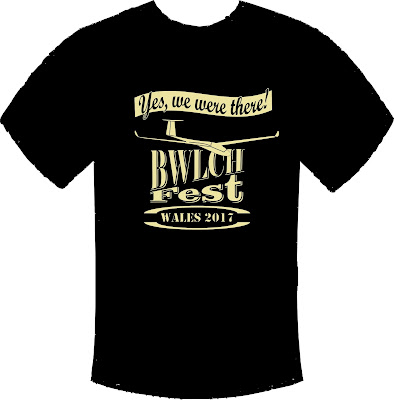 I have also produced a new promotional video for the event which I have put out on all the Facebook groups I use, and there has been quite a bit  of interest, so I'm thinking that there could be quite a good turn out, which would be great news.