I finally got in some flying.

So on Saturday I managed to get in a couple of hours flying, and I had Mark's company for an hour of that.

There were a few showers coming through, particularly over Cardiff as I could see, but they missed Meio completely, fortunately.

The wind was gusting to 16 mph but was due to veer to a westerly, so I wanted to make the most of my time before that changed.

I'd taken the L39 Albatross PSS model with me as it was the first opportunity I'd had to fly this since removing some nose weight, as I'm still trying to find the sweet spot on the CofG. As it turned out, it flew a lot better than last time but I felt it was still a little nose heavy, so I shall be moving the battery rearward a little more before its next flight. 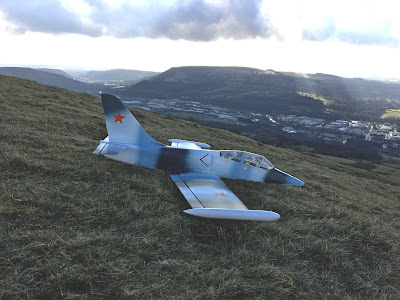 So I managed a couple of flights with the Albatross and also the Whisper before the wind increased to 21 mph but shifted westerly. By this time I was beginning to feel the cold so I decided to call it a day.

I did take some video so I will have a look at that this week and post it here.

The KST servo for the elevator on the L-213 has been delivered today, so I shall be fitting that this evening probably. And I'm still awaiting delivery of the rudder servo mount so that I can get that fitted along with the rudder and the Bowden cable for the pull pull closed loop system. Once that is done, I only have to paint the electrics tray under the canopy and that will be the fuselage completed.

I'm also awaiting delivery from the Hobby King Europe warehouse of the two Corona servo's intended for the Vagabond, so I must chase those up. In the meantime, I decided to remove the Gening servo's from another foam model that I'm scrapping and I will use those in the Vagabond instead, so now I can at least get on building the wing on that.