So at the beginning of this thread I had plans to glass the entire fuselage, but then the more I thought about it, the more I had doubts about this.

This is an EPP model which doesn't fly slowly, (think M60 racer), and it doesn't land slowly either, so it's likely to have some fairly hefty landings. I thought it best to retain the bouncibility of the EPP, so I changed my mind and went with a laminate film covering. So that was last nights job, covering the fuselage with 75 micron film.

It's a job I do enjoy doing and I seem to be getting better at it as this is the third model I've covered in lam. I've managed to get a nice smooth finish with few wrinkles or air bubbles. The most fiddly bit is always the pointy bit at the front, and it's just a case of making lots of little snips with scissors, folding over and sticking down, but it does take a bit of practice to make a half decent job of this bit.

Of course the better job you make of this at this stage gives you better results when you go to cover with your choice of iron on film later. 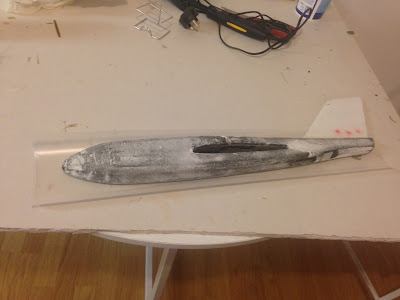 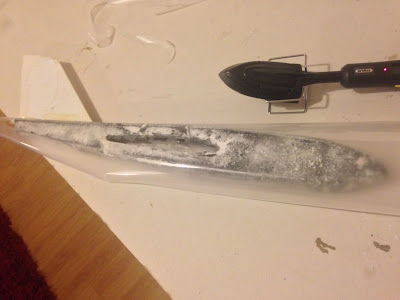 So now with the fuselage completely covered, I did a test fit of the wing and that was fine, so this evening I'm going to cover the fuselage in shrink film whilst watching Children In Need and enjoy a well deserved beer.