Well it's been a while since I last updated this blog due to holiday and a hectic social calendar.

Last Sunday a few of the guys flew for a couple of hours on Back of Wrecker at the Bwlch, but the conditions meant that there wasn't a great deal of activity as the wind was light, so it was mainly a case of just cruising around and chewing the fat.

This weekend the weather was not in anyone's favour, apart from mine as the wind speeds forecast were very low, and in fact when I went out in the morning to go for a run, there was no wind at all.

I had anticipated this and the evening previously I had charged up my LiPo battery packs and checked over the Climax Compact, a 2 meter span, V tail thermal soarer built from a kit from the people at Hollein in Germany, and late morning on Sunday I headed up to Manmoel Common, which overlooks the Festival Park shopping centre just outside Ebbw Vale.

The slope at Manmoel can be flown on an easterly wind and isn't bad as slopes go, but as I stood on the ridge line there wasn't enough breeze to keep a paper plane in the air. But what Manmoel also has is a vast, level area of soft ground with no trees, shrubs or other obstructions. It also has a natural grassy path, about 25' wide running from north to south and looks like it has been mown with a hover mower. This makes Manmoel an excellent venue for flying thermal soarers, either on the winch, bungee or electric power.

I was joined by Mark who had brought his F3J model with him. Unfortunately he had no method of getting it into the air as there was no slope lift.

The weather was gorgeous without a cloud in the sky and temperatures in the high teens, which is unusual for early November. The Climax Compact rose nicely into the air and I immediately headed downwind, and keeping an eye on the wind sock, I went searching for a thermal.

I think it was after my third powered ascent that my wind sock gave me my first indication of a thermal coming through and I flew the model into the direction that the wind sock was pointing. Bingo! At first she just circled, not losing or gaining any height, then slowly she began to rise and I followed the thermal down wind until it was becoming more difficult to see it.

I exited the thermal and was flying back to my starting position when I noticed a thermal push the model away from its course, so making a 360° turn I found myself into another thermal and the whole procedure started again.

I was in the air for about 20 minutes at a guess before my neck began to ache and so I brought the model in to land.

Whilst on the ground I set up the timer function on my transmitter to count up, so I could see what times I was getting, and on my next flight I followed the same pattern and once again found myself into thermals and another 20 minute flight.

This was the first time I'd had flights of 20 minutes from a flat field and I enjoyed the challenge of keeping a model in the air for that long using nothing more than the natural power of thermals.

It's hardly the most exciting of flying, but when there is little or no wind it's better than no flying at all. Next time I shall take a folding canvas chair with me and a flask of coffee and remember to head to Manmoel Common. 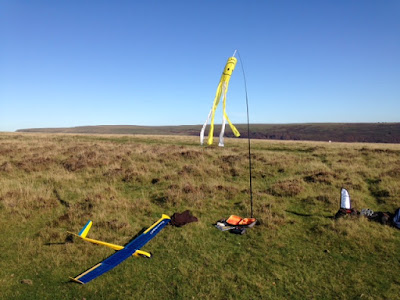 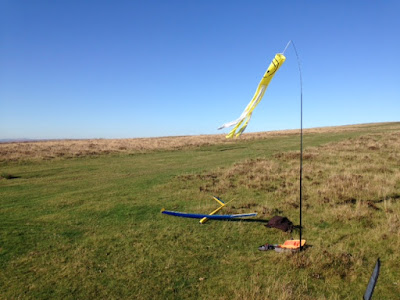