Friday evening was spent covering the fuselage with iron on film. I used the Hobby King stuff which I have used before and not had any issues with. I believe some users have said that the colour fades but I haven't been using it long enough yet for this to happen, so we shall see if this is true. But it is an awful lot cheaper than other brands and is supplied in 5 metre rolls.

The weather at home was awful on Saturday so I stayed in during the afternoon and covered the elevons with laminate film, which really stiffened them up, then began to cover the wing with the HK film. I did get one side done and I hope to continue this evening.

I can see a problem looming which I am going to have to find a solution for. I'm planning on using glass fibre cross weave tape to hinge the elevons, and I want to tape those on before I cover the wing. The wing slides through the slot in the fuselage, but it can only do this with the elevons removed.

I guess this means that I will have to apply the film to the top of the wing, but not stick it down fully until I have slotted it through the wing, attach the elevons, then iron down the film on the trailing edge. I think!

Here is a photo of the fuselage, an some wine :o) 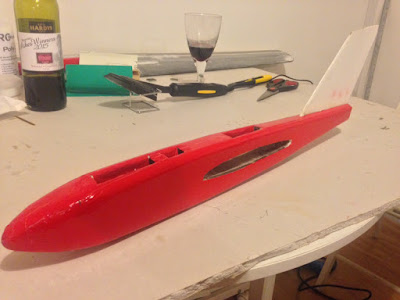