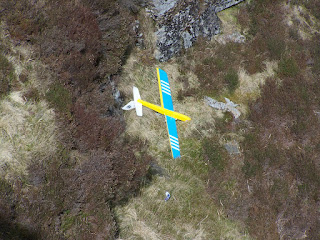 With a northerly wind forecast, the plan would normally have been to fly the VR98 slope at the Bwlch, but there was an F3F competition on there so we had to have a re-think.

I remembered previously driving past the Tower Colliery, heading south from the Heads of the Valley's road at Hirwaun and noticing the north facing slopes there. So with that in mind, Mark and I met up at Tesco, near to the Trefforest Industrial Estate on the A470 and set off through Pontypridd, Porth, Treorchy, Treherbert and then up the Rhigos mountain road to the snack van lay-by where we met up with Roger (Cliff Hanger) from Swansea who had flown the area before.

Roger showed us the way, along the road for maybe 150 yards, then turning off to head across the mostly flat common following a north west facing slope. After about 15 minutes we reached a white post stuck in the ground where the slope was now facing north and the 15mph wind was blowing straight into our faces.

I was the first to launch and my trusty Wildthing rose quickly into the air. Immediately I knew this was going to be fabulous flying with no turbulence at all. Landing was also a doddle with no rotor to talk about. Roger launched his Pshyco, followed by Mark with his Mini Graphite and Willow.

Roger left us after about an hour but Mark and I stayed on. As the day progressed, the wind did pick up just a little but the big thermals came rolling in and Mark was having a blast, taking the Mini Graphite up really high before powering down to perform HUGE loops and whistling past the slope face at high speed.

All to soon is was time to pack up and walk back to our cars, but we just know that if there's a north or north westerly blowing, we'll be going back there.

Mark, Phil and myself met up at Meio for a few hours flying and we also met up with Andrew Dowden, who Phil and I had spoken with on the modelflying.co.uk web site forum. Andrew hadn't flown the slope before and he had been given an old Zagi chevron wing which he had a go flying. Chris joined in with the fun a little later and apparently, after Phil and I left, the big thermals came through and Chris was able to fly his Dogan F3B for about 40 minutes away from the slope and over the flat top of Meio. 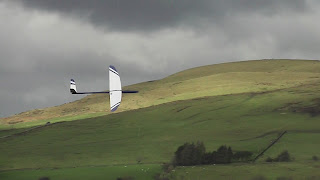 MOOCHING ON MEIO from Steve Houghton on Vimeo.
Posted by SteveH No comments: