I shall be ordering the Hollein Climaxx, 2.5m thermal soarer in November so, I've been looking at all the extras I'm going to need to buy to go with it.
I've decided to go for the electric version of this model as finding a flat field large enough to use my hi start, with 360* launching direction is posing to be something of a problem. An electric powered model will mean I can fly from a much smaller field. The model also has 80* dropping flaps which means I can land in a smaller area also.
Hollein recommend a Hacker A30 14L V3 motor but, these cost a lot more than I want to pay, so I've been trolling the net to find a cheaper equivalent. I think I've found one on the Pheonix MP site, a Tornado Thumper but, when you don't really know about motors its a bit of a mine field.
The ESC and battery shouldn't be a problem, nor the prop and spinner, but choosing the servos could be the next headache.
So I shall be ordering all these bits in October and, once I have the kit, it should keep me busy during the winter months building it ready for next Spring. 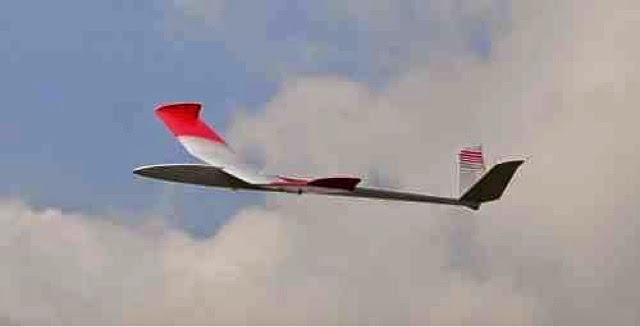 Looking at this weekends weather forecast, it hardly seems worth getting out of bed, let alone charging batteries for model flying. But the optimist in me cannot but help this weekly ritual of checking the forecast and choosing my models to suit the forecasted conditions. So I have the Libelle and Whisper on charge.
It also seems hardly worth driving miles to a slope, only to find there's more chance of landing out than staying airborne, so I think I may stay local and set out the bungee for the Whisper, as long as the sun makes an appearance. I know one doesn't need the sun to be out to catch thermals but, with the luck I've had this year at thermal soaring, I need as much help from the sun as possible.
Anyway, we'll see, the weather man has been known to be wrong before.
Posted by SteveH No comments: 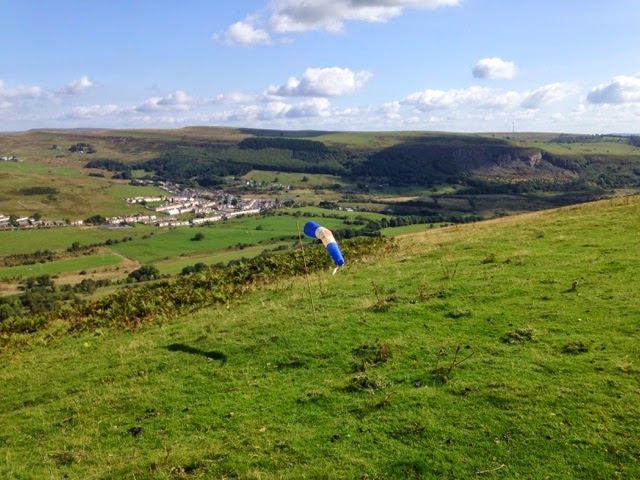 Well firstly, thank you to Marc from Slope Soaring Sussex for coming along today and joining in with the flying fun. I think he had an easy introduction to Welsh flying as we were unable to fly at the Bwlch due to the Welsh Open F3F championships taking place there.
We had to share the Fochriw slope with a load of paragliders and hang gliders, but we all got on ok and there were no incidences.
The wind on my arrival was probably about 18 mph but quickly dropped by a good 10 mph and we were struggling to fly anything other than a few foamies.
Here are a few pics. 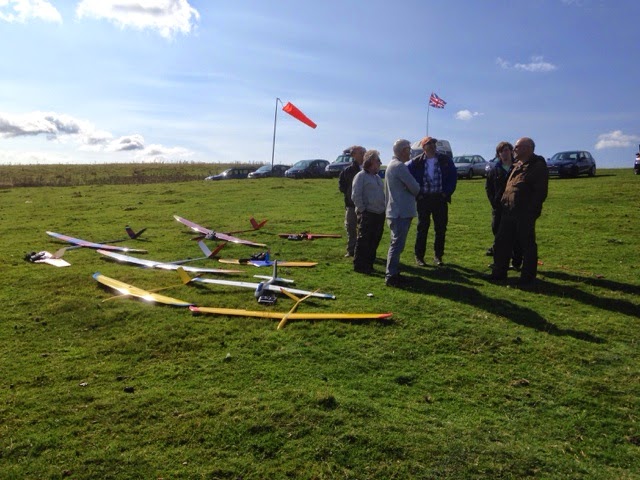 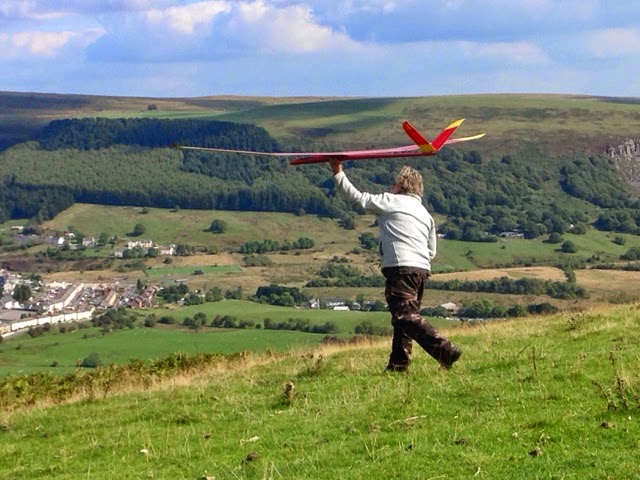 With an easterly forecast on Sunday, the obvious choice of venue to fly was the mighty Crest at the Bwlch. However, I wanted to maiden my Traceur and M60, and the Crest is the least forgiving slope around, so it wasn't my first choice to fly these models for the first time. Mark, Chris and Wayne headed up to the Crest whilst Phil and I went to Manmoel, which overlooks Festival Park in Ebbw Vale, which is a much more forgiving slope with little rotor. The slope faces east and today we had 20 mph plus, plenty of lift for this and in fact, I was a little worried that maybe the wind was too strong, but I needn't have worried.

We test glided the M60, (this is an early version of this plane) but there was a problem and we lost power to the electrics which I suspect is a switch problem so, I'm going to rip out the switch, ( always seems to be the weak link in a radio system) and change the battery.

The Traceur went out fine. It did need quite a few clicks of left aileron and a couple on elevator. I'd set it up with no expo, which I'm not used to as I always put expo on aileron and elevator, but this is not a fast model and I got used to not having exp very quickly. I did pass the tx over to Phil, but he didn't like not having expo.

Anyway, this is a really fun plane and I'm going to look forward to flying this. Here's the video.

Lots of text messages were being sent back and forth between myself, Chris & Mark to decide where to fly.
The forecast was for a very light north easterly breeze. Our choices were the Wrecker at the Bwlch, but with this being a near vertical, 1000ft cliff, this can be a butt clenching experience flying in such light winds. I know, I've done it and lost a plane half way down. Fochriw would have been our favourite venue but you could bet the paragliders would have been there too. So we decided to play safe and head for Meio Common.
On arrival it was obvious that we were going to struggle as most of the breeze in our faces were being generated by thermals, and that wind means sink.
Mark managed to get his newly repaired Mini Graphite up, (good to see that flying again Mark), but ended up running out of air and had to land. Chris had the same even with his Experience Pro F3J. So most of the flying was done with Libelle and Blaster DLG's.
I did try to give the Traceur it's first flight and walked back up the slope where the slope is shallow and gave her a chuck. She wanted to go down so I gave her six clicks of elevator up trim and threw her again. She flew nicely all tbe way down and over the steep part of the slope. I managed one traverse of the slope before I ran out of air to keep me up and had to land in the ferns 10 metres down the slope.
Ah well, we occasionally get days like that. Hopefully next weekend will be better and I can give the Traceur a proper maiden flight. 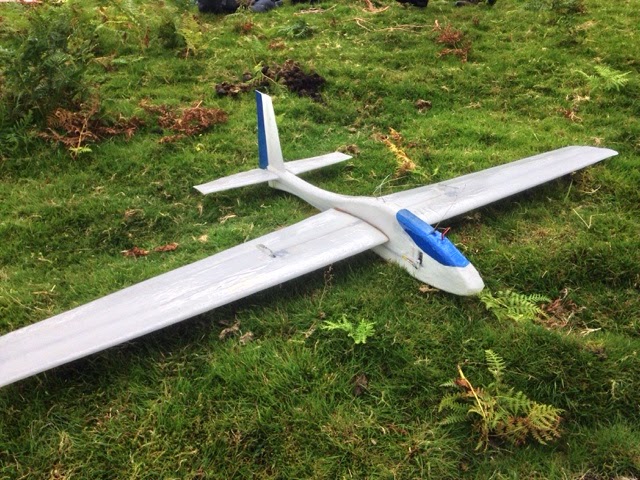 Last Sunday I met up with Big Phil, Wayne, Mark and Chris, the usual suspects on Mickey's at the Bwlch. The wind was light but we still had some good flying.

Chris had bought a Mini Graphite 1.9m which he successfully maidened. This is a marvellous little  plane which will fly in a gnats fart or in stronger winds. It's fast, agile, but most of all it's fun.

Here is a video of some of the action.