Sunday 8th December 2013 - The boys having another day of slope fun on Meio Common. This was also the first time I managed to get some video of my FVK Signal which I bought from Chris in the spring.

Sunday 24th November 2013 - I met up with Mark, Chris and Clive on the VR98 slope at the Bwlch. This is the north facing slope and today the wind was very light, but as with most of the slopes on this fantastic site, you only need a whiff of a breeze to get a plane in the air.

This slope has the shortest landing zone of all the six slopes with a road just behind the flying area, so landing is achieved by coming in low from the right hand side generally and coming in across the wind, tuning into the wind at the last minute. This can be a bit tricky at times and can take several attempts, but at least the ground is covered in very long, soft grass for when you need to dump the plane down unceremoniously.

In this video Clive is flying his Ceres and Chris his Toucan.

Friday 22nd November 2013 - Mark and I met up on Fochriw, a Heads of the Valley's slope close to New Tredegar. This is a north east facing slope that offers fantastic flying with very little turbulence and a good landing zone, but the big bonus, particularly in winter, is that this is a park and fly site, (because you can get into your car for a warm up). When you watch the video, I was filming next to my car, which was about 30m from the edge of the slope.

In this video, Mark is flying his Cappuccino, wind was about 24mph and ever so slightly off the slope from the north. 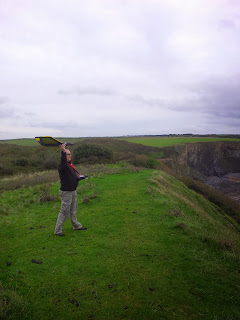 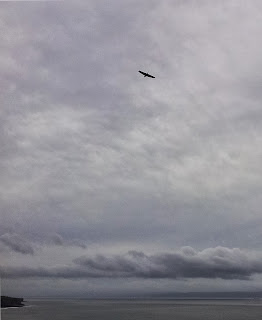 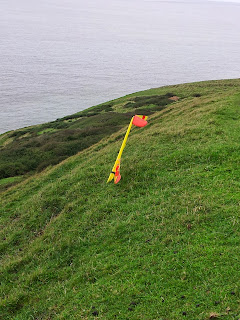 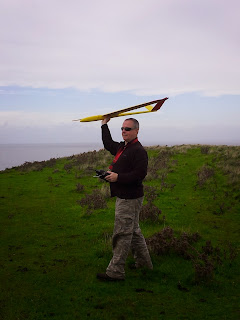 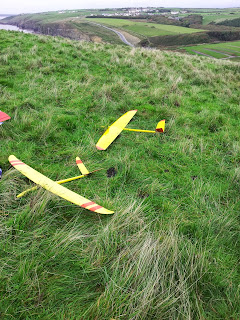 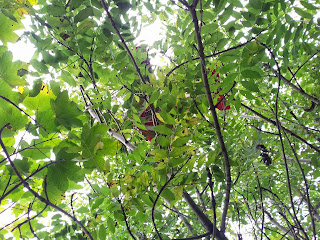 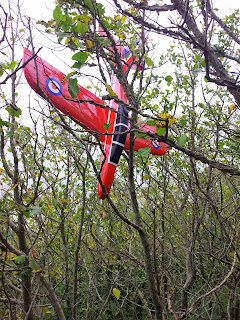 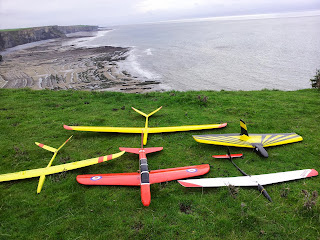 A little bit of self indulgence!

More 5th October Video - This is just lil ole me flying my X Models Whisper on the Ice Cream Slope. A very versatile model which I love flying.

Saturday 5th October 2013 - Paul and Jack from the Brighton area saw this blog and the flying here and thought they'd love to come and have a go.

I met up with them just after they'd arrived on the Ice Cream Slope at the Bwlch. At 10am the wind was very light, north westerly and we were struggling to keep anything in the air.

Mark turned up, ummed and ahhhed for a few minutes before deciding to try his luck on Mickey's West, even though what breeze there was would have been off the slope, but the wind was due to swing to the west during the early afternoon anyway.

I stayed with our visitors and the breeze did pick up to about 8 - 10mph and we did manage to get some reasonable, easy flying in for a couple of hours.

By midday Paul and Jack decided to go and get some lunch and I arranged to meet them on Mickey's West that afternoon, so I headed off on the longish trek over to the other slope.

When I got there, Mark and Chris were flying but the wind was still obviously coming from the NW but, as time went on, so it did begin to swing westerly, but it also died in strength and flying became a challenge to say the least.

Another regular visitor, Doug from Kent also turned up at the slope followed by Paul and Jack.

All in all it wasn't a bad days flying but it would have been so much better had we had 20 - 25mph blowing up the slope. Never mind eh, maybe next time eh lads.

Here is the video and don't forget to hit the HD button at the bottom of the viewing pane for the best quality.

Sunday 1st September - I can't believe it was May when I posted my last blog update! Where has the time gone?

Well the boys met up on Mickey's West at The Bwlch for the day. Big Phil had brought his latest aquisition, a Phoenix models Red Arrows Hawk, which flew great once he'd added some ballast.

Mark had his Willow F3F and Cappuccino, Chris his Air One F3F and Tucan, and Clive turned up with all manner of models.

Video speaks louder than words, so here it is.

SUMMERS END from Chuck Glider on Vimeo.
Posted by SteveH No comments:

Thermalling on The Meio

Sunday 19th May 2013 - Mark, Chris and myself arrived at The Meio to discover that there wasn't a breath of wind and Mark couldn't even keep his Mini Graphite in the air, and that'll fly in the merest of breezes so, Chris brought out his F3J 3m Experience Pro and bungee and we had some fun thermalling over the flatish grassy top of the common, each of us taking turns to have a go. My Whisper has a tow hook but unfortunately I had a soldered connection come away from one of the wing multi connectors.

Thermalling on The Meio from Chuck Glider on Vimeo.
Posted by SteveH No comments:

A Brace of Odyssey's

Mark and Chris flying their Ron Broughton designed Odyssea planks on the Meio.

A Brace of Odyssey's from Chuck Glider on Vimeo.
Posted by SteveH No comments:

Well Chris has managed to get his hands on Roger's (Cliff Hanger) Jedi Homebrew. This is an Airtech Jedi fuselage and wings made by foamwings.com. This video was it's maiden flight with Chris at the controls. I love this plane, I am so jealous!

Is Winter Nearly Over?

This winter has been a grueller! The boys and myself have met at a few slopes but only managed an hour or so's flying as our fingers were turning blue and going numb with the cold.

In our area of S Wales we're blessed with many slopes facing most directions but, we are short on slopes facing south and south east. Last Sunday, Mark and Chris were going to fly the SE slope of The Garth, at the southern end of the A470 but, Big Phil and myself decided to try a slope closer to home, in fact only a 15 minute drive from my house, and 5 minutes for Phil, and a slope we haven't tried before as we rarely get a south easterly.

So Phil and I parked up and marched up to the slope. The wind was very light to begin with so we decided to chuck up the Wildthing and Weasel, stooging around for a while until the wind picked up enough to throw up the mouldies, a Banana and a Whisper.

The flying was no great shakes that day due to the light breeze and, we only managed a couple of hours as our fingers were becoming numb with the cold again. But that slope certainly has potential when an easterly or south east blows.

Here is a clip of Phil launching his Speedo.