This build is going to hold a few more challenges than my previous correx builds, mainly because the plan I'm using is not the usual 'unwrapped ' fuselage and wing type but a conventional one.

Also I am going to build the fuselage out of 2mm sheet instead of my usual 4mm. The reason for this is to try to reduce weight of the finished model. First off I glued the plans of the formers onto 4mm correx and carefully cut these out using a sharp craft knife, ensuring the blade was kept vertical at all times. I then used coarse sandpaper where necessary to get the correct shape. A 10mm hole was then drilled at the pre-marked centre spot. All the formers were then slide onto a length of 10mm diameter wooden dowel and lined up as per plan....This ensures that the fuselage is going to be build straight and true.

This is the plan I'm working off. 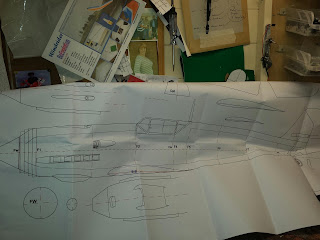 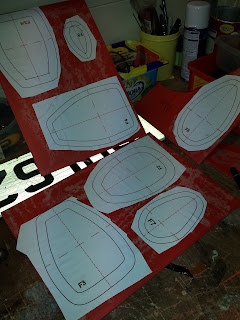 Formers are pushed on to wooden dowel 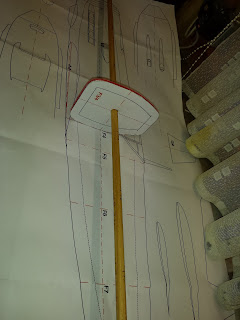 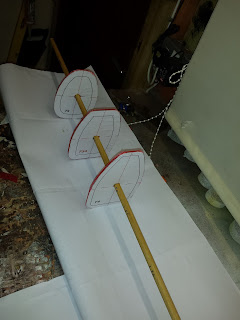 Bearing in mind that I am a cheap-skate   :-) and want to keep the build cost to a minimum instead of buying carbon rod I looked around my sheds and found some strong, light weight plant support sticks which will do nicely.

I rebated the top and bottom of the formers with my Dremel type tool and hot glued the stringers in place ensuring that they were straight. 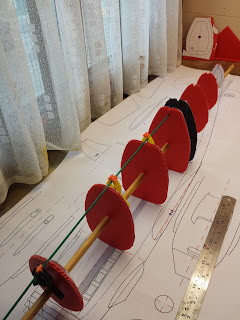 Correx sheet needs to be more flexible to allow it to bend around curves, to achieve this we 'de-flute' it.
To do this you use a hooked Stanley knife type blade and slit open the flutes on the inside surface  of the correx by drawing the blade down the length of the sheet, ensuring you only cut through one side of the flute or you end up cutting the sheet in half.

Normally the plan will show you what sections you need to de-flute, but as this build plan is not intended for a correx model I have to decide as I go along where the curves are needed. 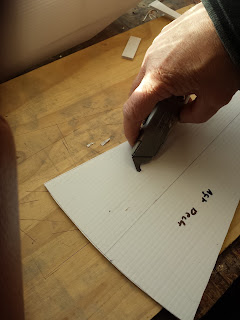 Before and after shot of a piece of de-fluted sheet, note how more flexible it is. 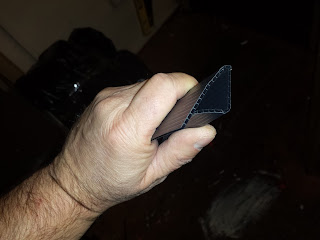 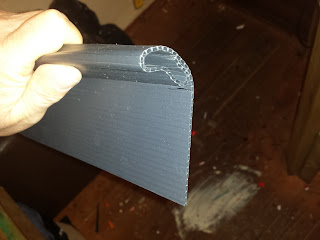 Normally you would have an 'un-wrapped' fuselage piece of sheet that you would wrap around the formers, glueing as you go. 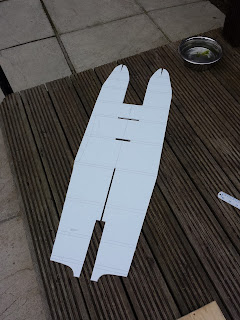 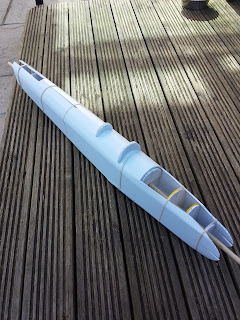 But with this build I am finding that I have to use smaller pieces of sheet to build up the shape as I go along.
A problem with this method is that I will have a lot of joins that will need making good. 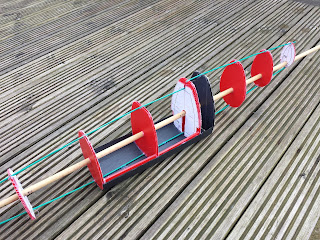 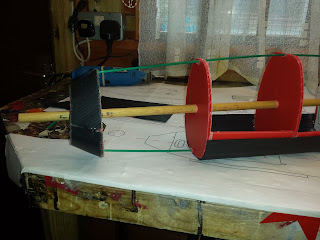 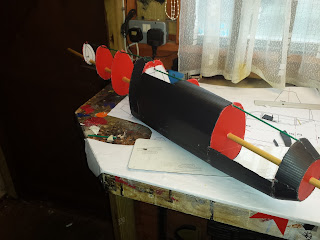 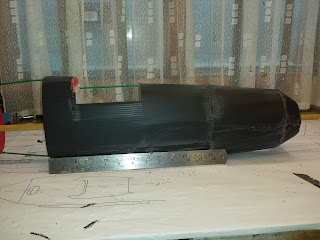 Progress has been slow at the moment due to other commitments, but today I managed to spend a couple of hours in the workshop.

I was having a problem sourcing a canopy and it was looking like I was going to have to mold one myself, but after some more  searching I've managed to find a suitable one on-line, hopefully it will be ok.

This afternoon I started to cover the  section of the fuselage from the cockpit rearwards, this turned out to be more difficult than anticipated mainly because I wanted to use 1 piece of correx for each side instead of multiple pieces. The correx just did not want to follow the shape of the 3 rear formers and join to the cockpit section without creasing.

This is the 3rd attempt...not perfect by any means but I hope I can make good. 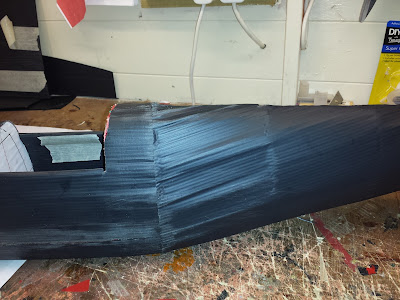 Securing the sheet to the formers and stringers was by my usual method with correx builds of a hot glue gun, which I find gives me about 20 seconds to position correctly before the glue starts to cure.

I have only managed to complete one side this afternoon and here are a couple of photos to show the progress. 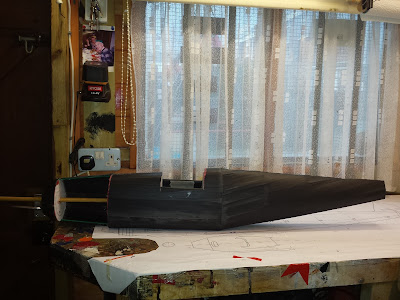 The tail is just a rough piece taped in position to get an idea of size to see if I need to increase it's dimensions slightly. 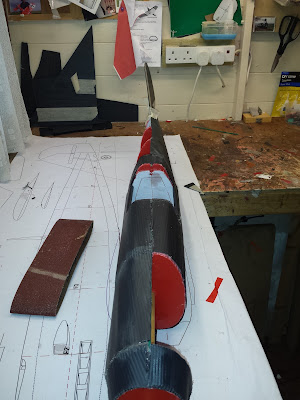 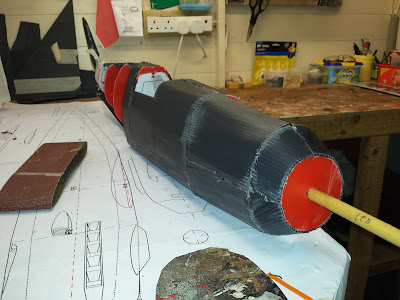 I've left the front section open so I can add the battery and receiver  latter on. 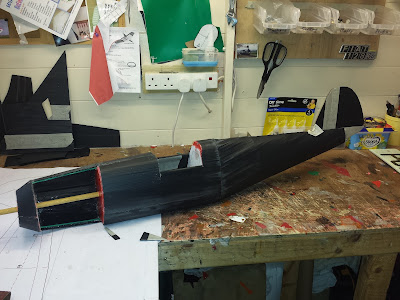 Construction of the fuselage is progressing nicely.
I'm awaiting delivery of a sheet of 4mm correx for the tail fin and horizontal stabilizer, so I've decided to make a start on the primary covering.

Usually I cover my correx builds in vinyl, but this model is going to be painted in the colour that the Luftwaffe used for the  Polish invasion in 1939.

Painting on correx will require special primers and paints and as this is a 'budget' build I carried out a few tests on preparing the surface so that it will except standard paints.
The best result I had was to sand the surface down to 'key' the plastic, then spray the correx with a 3M type aerosol glue and while this was tacky I applied brown paper  to it.
This has dried ok so I should be able to paint and seal this with no problem....hopefully, only time will tell. 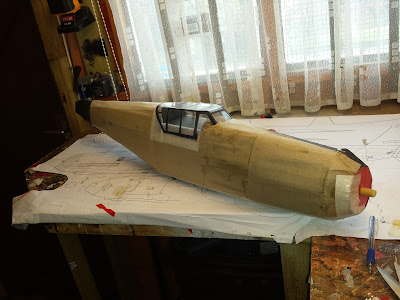 Looking a bit rough at the moment, but getting there , albeit slowly.

As you can see, I've managed to source a canopy which is the correct size, this saves me trying to make one.
I'm having a flat nosed spinner 3D printed up, along with a pair of exhausts and an engine air intake. These should help with the 'scale look'.

I've also made a start on the construction of the wings, again I've used my tried and tested method of build using 2mm sheet for the wing skin and a 8mm thick pine strip cut to shape & size for the spar.
This method produces a flat bottomed 'Clark Y' type section, along with 2.5" of dihedral under each wing, has proved very successful.

The wing template is drawn around to form the basic shape of the wing. 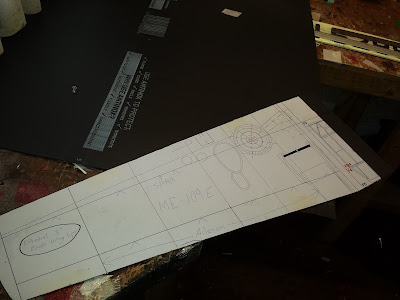 But you do not cut along the L/E  as this becomes a fold line  and the material in front of the fold line/leading edge becomes the top of the wing. 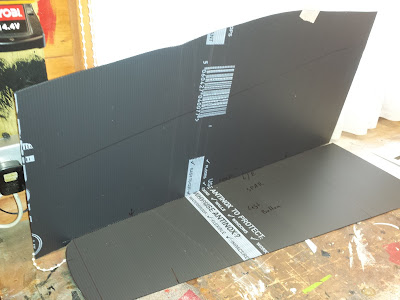 Right, lets carry on with the wing.

A spar made out of a strip of pine batten 8mm thick is cut as per plan, although I have slightly modified it  to include a slight amount of wash out in the finished wing.
The spar is glued to the bottom of the wing using my hot glue gun.

Note, this photo is from the Impala build but the same principle applies. 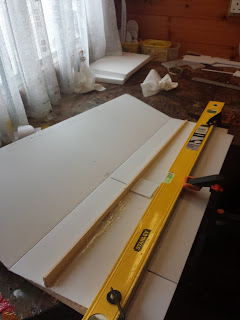 Once the glue has cooled you apply 2 pack adhesive to the top of the spar and the rear most edge of the trailing edge.
I then gently folded the wing back from the leading edge over the spar and slid the wing into my jig, the purpose of the jig is to keep the bottom of the wing flat and help form the correct angle of the leading edge. 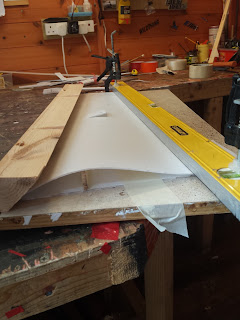 A straight edge and clamps were used to hold in place while the glue dried.
Note how the top sheet rolls over the spar with out kinking
I made a mistake with the first attempt and creased the wing over the spar, this wing was scrapped. 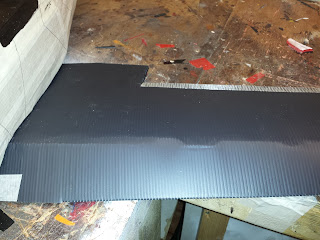 I seem to of miss placed the photo of the finished wing but I'll try and find it and add latter.
The curve over the spar is supposed to be gently with no crease.

A second wing is build the same as this but obviously the other side, not like I've done before and       built two left hand  wings!!!!
A piece of batten is cut as per plan into a vary shallow 'V' shape and approx 8" long, this will be used to join the wings and add the correct dihedral  ( 3" in this case )

The aileron is cut out, again following the dimensions on the plan, this will be hinged with cross       weave tape latter in the build.

As I planed to paint this model I decided to cover the model in brown paper which was applied after spraying the fuselage with a 3m type glue, 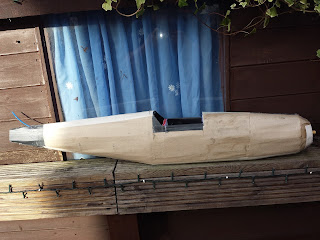 The fin and horizontal stabilizer are made from 4mm correx to give a little more strength, these will be fitted into the slot in the back of the fuselage.
To me it looked like the fin on the plan was slightly to small so I increased it  by approx 10 mm          which I think is an improvement on it's appearance. 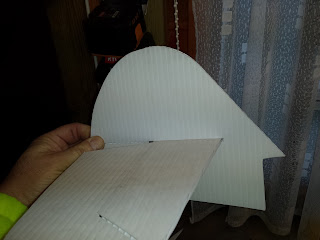 To allow the elevator to move you run a blade along the hinge line on the bottom of the stabilizer only cutting through one side, this allows the top side to act as a hinge. 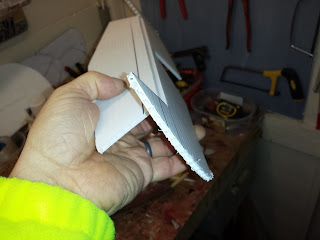 That's all for now guys until next time....