Will the east & south east winds ever end?

It seems that we have endured easterly or south easterly winds for months now! Any of you who know the slopes of SE Wales will know that these are the two worst wind directions for our flying, particularly as we have lost the north easterly slope at Fochriw to fly since Caerphilly council erected a locked gate at either end of the road, effectively closing down this slope to us, and all because they haven't got the financial resources to police the fly tipping that has been going on. But if the council didn't charge businesses so much to dump their waste at official tips then they wouldn't have this problem. But that's me straying off the wind direction subject. I still find it annoying though, if you hadn't already guessed.

So I had last Saturday free to do a bit of flying, and the forecast was for sunny, warm skies with a SE to SSE wind of 7 - 8 mph, so I contacted Nick to see if he fancied joining me somewhere, as I knew he'd be wanting to fly his new acquisition, the E-flite Mystique for a bit of slope thermal flying. So the question was where to fly? I suggested the Bwlch but Nick suggested Blaen Bran at Cwmbran. Now Id forgotten about this slope which I haven't flown for probably a couple of years at least, and that does fly south easterly. It isn't the best slope, especially for landing as the ground is covered in long, tough ferns, and as I discovered, it's incredibly difficult to get your model down to land. More of this later.

I loaded the car with two models, the Multiplex Heron,
(just in case there was less wind than forecast and I needed electric power assist to fly), and my trusty old X Models Whisper.
Now the last time I went to fly the Whisper, one of the flaps wasn't working, so I'd looked to see if it was just a loose connection but the servo still didn't want to work, so I assumed that the servo was kaput, but on Friday evening I thought Id try out the servo and if it didn't work, then I had a mini servo spare I could use temporarily but, lo and behold, the flap worked when I tried it, so I guess there must be a loose connection somewhere and I decided I'd take the Whisper and chance the servo.

It was a good hike up to the top, and there was a guy up there flying a powered model, some E-flite pylon type racer, so I joined him and he introduced himself to me as Paulo, originally from Brazil but has lived in Newport for ten years. The breeze was gusting to an estimated 10 mph which I knew should be enough for the Whisper to keep airborne, and then as long as there was thermal activity I should be able to stay up quite well. So I assembled the Whisper, switched on the receiver and yes, the flap was still working, so I launched it off the slope. The wings wobbled a bit initially but I pushed out and the model found some slope lift and thermal activity and it wasn't long before I had enough height to feel comfortable. 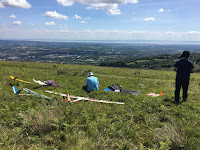 I'd been cruising around for a few minutes, flying from thermal to thermal when I caught Nick walking towards me in the corner of my eye, so I decided to land for a chat. This was when I discovered how difficult it was going to be to land. I had good height and flew the down wind leg and lined her up, pushed the nose down slightly before activating CROW braking, but it didn't seem to slow down and I was struggling to lose any height, so I went around again, and again, so I walked further back and I knew I just had to be more forceful with it and I finally got it down. Phew! I later found that there was some great thermal activity going on in the landing zone, so much so that on another landing I was caught in a thermal and circling very quickly, almost DS style with the sound of the wind over the airframe, as you get with glass models.

Nick flew his Mystique and encountered the same difficulty in getting his bird down that I had, and as I had to leave at around 3:30 PM he flew his Flip and had some cracking thermals by all accounts with him reaching an ASL of 1200 feet.

So all in all it was a good session but, by now we should really be having winds coming from a SW or westerly direction so that we could be flying from Meio, Mickeys or Rhossili. However, if the forecast for the coming weekend remains the same, then those westerlies should make a welcome return and hopefully I can get some flying in on Sunday.