It's been a few weeks since I've done anything much on the streamline 350, partly due to me being side tracked by completing the Bird of Time and partly due to other commitments, but I did manage to get some work done to it a few evenings ago after work.

So, I soldered an XT90 LiPo connector to the ESC, (I'd had to order that connector) and fitted the ESC into the model. I'd also ordered a RX and fitted this temporarily and then came the job of setting up a new model on my Hitec Aurora 9 TX. Now if you're not familiar with this TX, when you set up a new model the TX asks you what kind of aircraft it is? I clicked on glider, then it asks how many ailerons & flaps it has, whether it has spoilers, retracts, a motor and whether it has a normal tail or a V tail, then once that has been completed it automatically asigns a channel for each control. I then needed to bind the RX to the TX and that was all done.

Then I needed to calibrate the motor so I switched on the TX and pushed the throttle stick all the way to the top and plugged in the LiPo to the ESC but all I got was a continuous beeping, which was not what I was expecting. I checked and I'd plugged the throttle lead from the ESC into ch8 of the RX instead of ch7. Doh! I switched it all on again and I then heard four beeps, indicating the 4 cells of the LiPo, but nothing else and it didn't calibrate.

I did a lot of head scratching and then decided to look at the TX programming for my Multiplex Heron, which should be the same. All appeared OK. More head scratching. I then clicked on the monitor funtion on the TX which shows sliding bars whenever a control stick, slider or switch is moved. The throttle on ch7, (throttle) moved OK so I then checked this on the Streamline program, but when I moved the throttle stick (J3) nothing happened and the bars didn't move. So I went back to look at the channels again and saw that the throttle had been allocated to ch7 but, the TX didn't automatically allocate the stick. Once I selected the left stick (J3), the sliding bar in Monitor was working so I tried to calibrate again and bingo, it worked, although the motor wouldn't turn, so I swapped two of the wires around at the motor end and the motor turned, and in the correct direction also, hooray 😊. All I needed to do then was set the brake and that was all done. 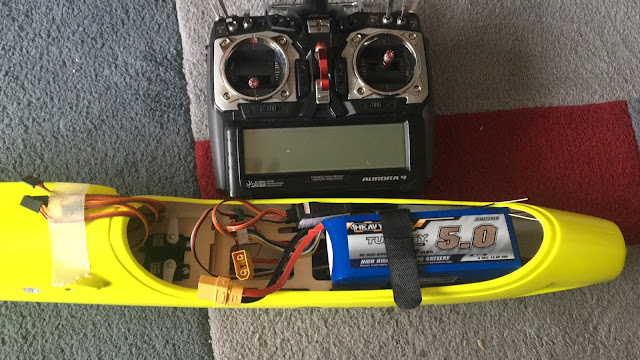 My next jobs are to connect the rudder and elevator control rods to the servo arms, fit the wings to the fuse and work out which of the wires already pre installed from the Multiplex connector in the wing root into the fuse controls which aileron and which flap, if that makes sense, so I can plug them into the RX. I then have to set up the control linkages on the wing servo's with power to the servo's and attach the servo covers, then I think that's it apart from setting up expo, dual rates, crow or butterfly. All I will need then is a suitable day to give it a throw into the wild blue yonder.

Hi all and welcome back. Here is my latest video which was filmed during a weekend afternoon session on Mickeys slope at The Bwlch. Weather wise it wasn't a bad day although when I 1st arrived the slope lift wasn't great although there were lots of thermals working through, but an hour later the slope lift had improved enourmously.

Nick flew his Valenta SB9 for the 2nd time but unfortunately by this time the slope lift had begun to deteriorate, and then he flew into a huge patch of sink and it tip stalled, and then a little over correction of the controls didn't help although Nick did manage to regain control quickly. He decided to return to the slope asap and decided upon a downwind landing. Unfortunately he deployed the spoilers and a wing tip stalled again and he crashed. Fortunately the damage was minimal, but watch the video all the way to the end to see how it all panned out. 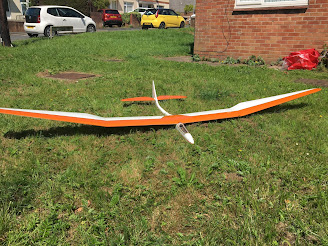 A couple of years ago I picked up a second hand Dynaflite Bird of Time from a guy down in Paignton, Devon with the intention of fitting a motor to it. Well I never got around to that and then it got lost in a cupboard until a few weeks ago when I was having a clear out.

The model had already been fitted with a rudder servo with linkage and a elevator servo and linkage. That elevator servo had been positioned just behind the rudder servo up front instead of at the base of the tail fin (vertical stabiliser) as per the instructions, with a bell crank taking that servo's place. The wing joiners had already been assembled also. I had to modify the control rods a little to make them the correct length and solder snap clevises on. I found a 5 cell, 6V NiMh battery pack in my box along with a switch and took a receiver from another broken model, then when it came to balancing the model I had to add another 50 grams of lead into the nose.

So now I just need to find the time and a suitable light wind day to fly this from a local slope, because that is where I am intending on flying this, on those days where there is marginal slope lift and I can hunt out the thermals. So hopefully it won't be too long before I can post a Bird of Time maiden flight video. 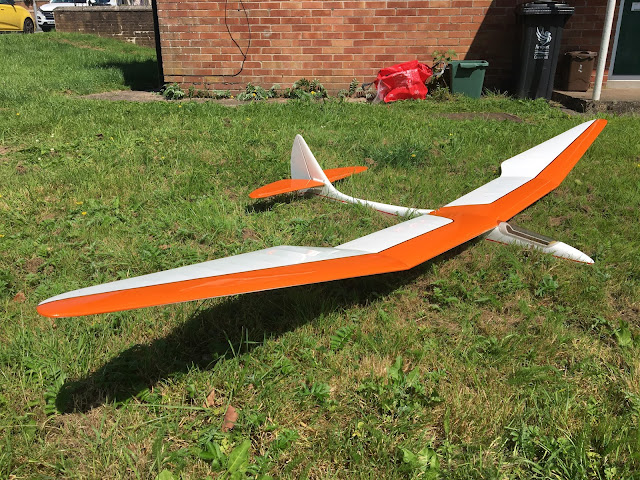