A catch up on last weekends flying

Well Saturday was the only available flying day due to the weather, and I met up with Mark at Abertysswg as we had a north westerly blowing in. We had thought about going to the Bwlch and flying on the Ice Cream slope but, with snow showers forecast, we thought being close to the car would be good so that we could take shelter. As it happened, that was a good idea. Phil turned up a little later with his youngest son and had a short while flying before the cold kicked in.

I arrived late morning with only 1°C showing on the car temperature readout. The wind was light and we could see bands of snow showers heading our way in the distance, coming in from the Brecon Beacons, so flying between them was going to be the order of the day.

As the day went on, the winds did pick up and Mark was able to fly his old Acacia F3F machine, whilst I flew the Whisper, Traceur and Wildthing.

The fin modification I made to the Wildthing, (see a previous post), worked well, which I was very pleased with. I'm still trying to get the settings right on the TX for the Traceur. For instance, when I first flew it, the elevator was far too twitchy with only a little movement input, so I added some expo. This worked, however, when I go inverted, I find that I have to push the stick well forward, and then all of a sudden the elevator kicks in too much and she shoots upwards. Maybe I should try reducing the movement a little more!

On Monday, Phil had another big angina attack and ended up in hospital, where he still is. We are hoping they will fit him with stents, which will help prevent the attacks. We all wish Phil a speedy recovery and we hope to see him back on the slopes soon, as I know he is dying to get out there.

It doesn't look like I will be flying this weekend. The weather forecast isn't good with rain for Saturday and 40mph blowing in on Sunday. As it happens, I am running in the St Davids Day 10k in Bute Park, Cardiff, so I wouldn't be flying anyway.

The following weekend I am heading to Crawley after work on Friday 6th, and then onto the slopes of the South Downs for some flying with Paul Hampshire and the boys of Slope Soaring Sussex on Saturday and Sunday, which I am really looking forward to. This will be my first of three "away" trips I have planned for this year so far. I love flying the slopes of S Wales but, it's nice to go elsewhere and try slopes in other areas.

Anyway, that is all for now and I hope to see you on the slopes soon.

PSSA event at the Bwlch

So it has finally been decided that the PSSA will hold their first ever, Fly for Fun event at the Bwlch on the 19th & 20th September 2015. If this proves to be a success, then hopefully we can have another next year also, which will also be the PSSA's 30th anniversary I believe.

It will be great to see such a variety of different models, of all shapes and sizes flying from our slopes.

And on the subject of PSSA events, there is one taking place in April on the Orme, and another in June, also at the Orme.

I shall look to go to the June event as my Lightning won't be ready to fly by the April one, and besides which, I am away on a sloping holiday in Cornwall then. But I will be looking to go to the June event and probably stay at the camp site where I stayed three years ago, when I flew with Tim Mackey and the boys, and a great time that was too. So if anyone fancies joining me on this jolly, I'd love to see you and we'll have a great time.

See you on the slope soon.
Steve
Posted by SteveH 1 comment:

For those of you flying the SAS Wildthing. Are you fed up with the model flipping over on landing and the fin being bust off? Well I have the solution. Attach the fin using rare earth magnets as per the photo's below.I used a drill bit a similar diameter to the magnet and created a crater in the balsa side brace to one side of the fin and glued the magnet in. I then did the same diagonally across to the rear of the fin. Then corresponding craters in the foam wing with a magnet glued into each. The fin is now secure enough to fly but will come off in a heavy knock and, also makes the model easier to transport. 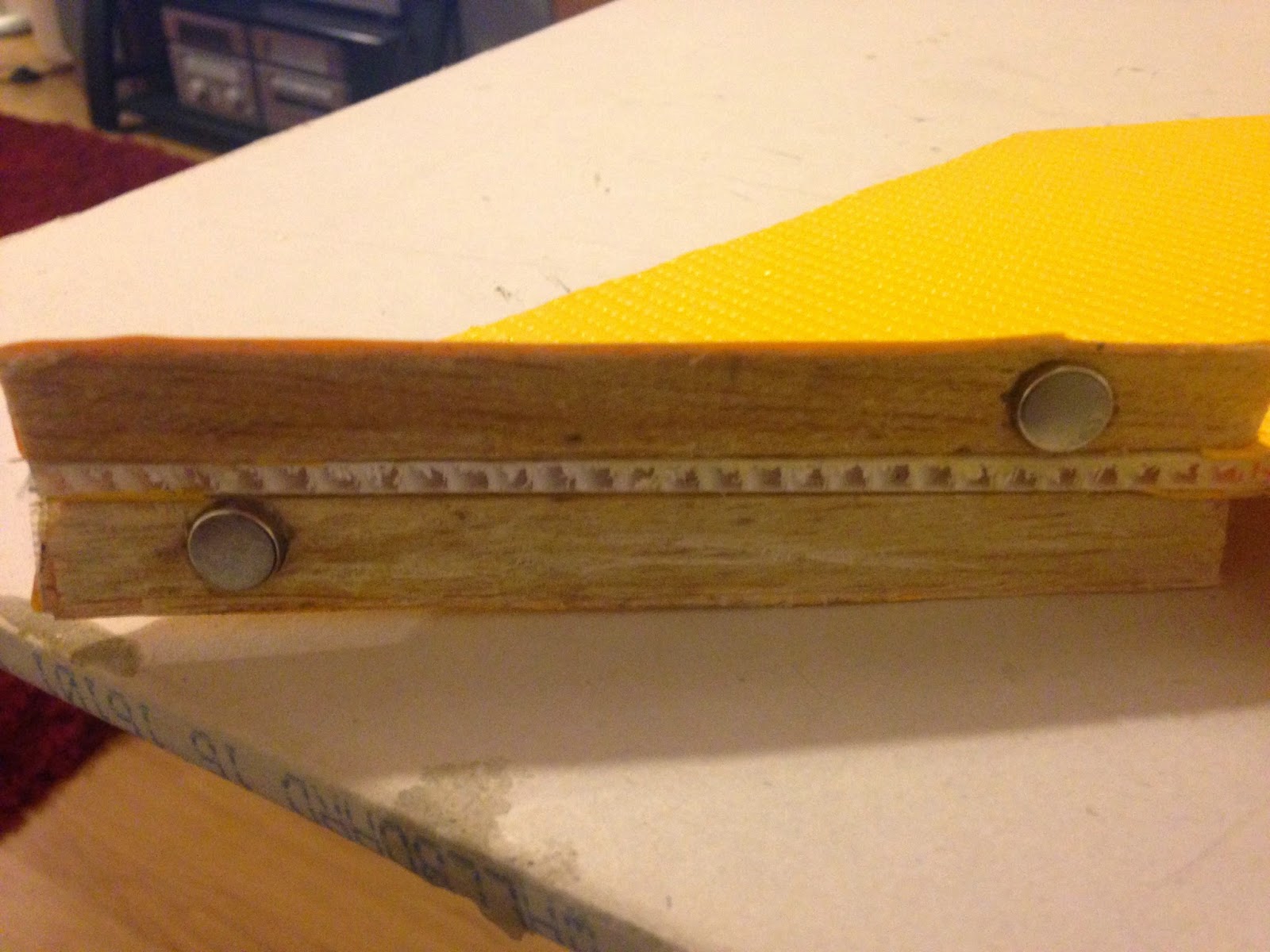 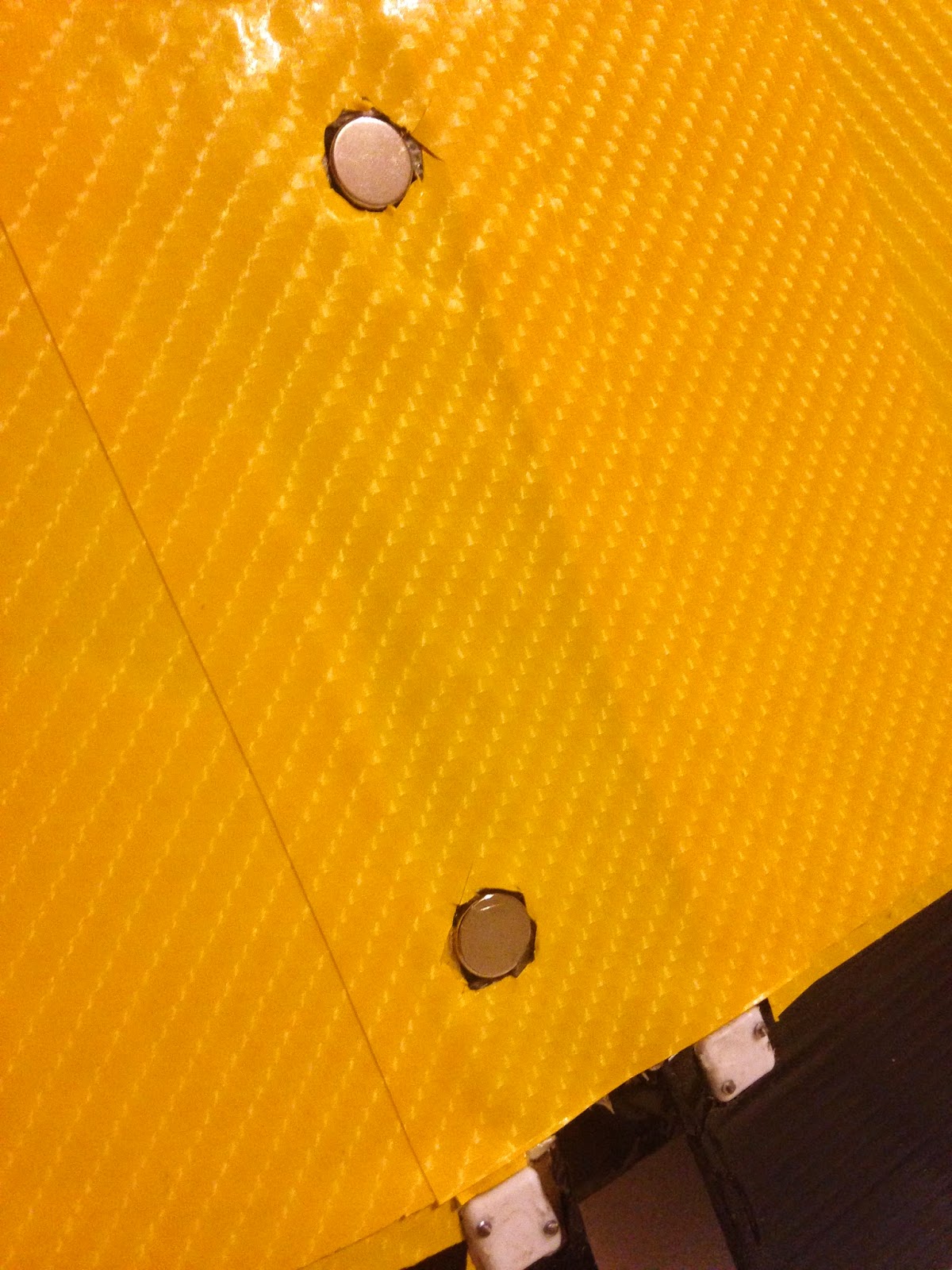 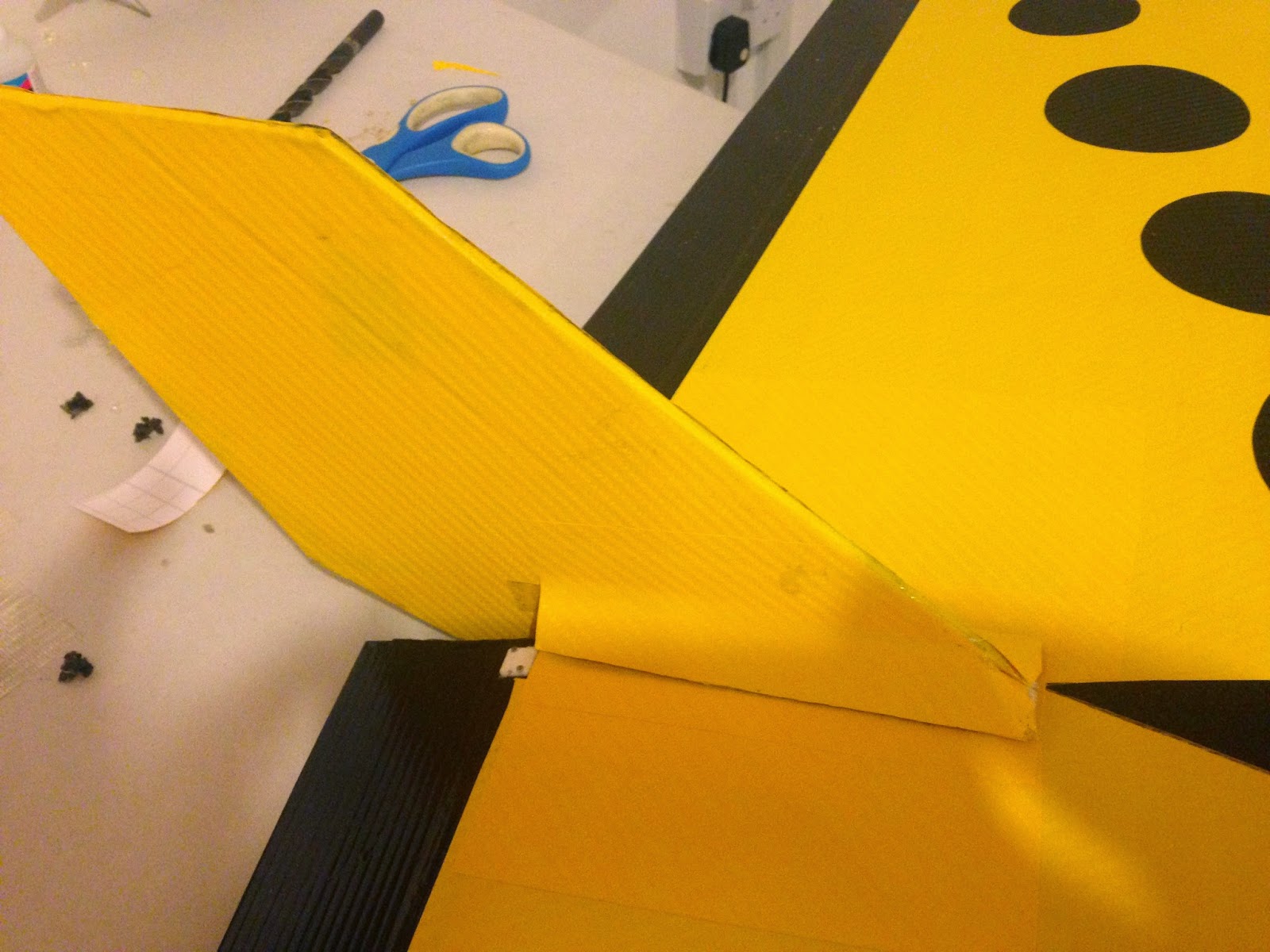 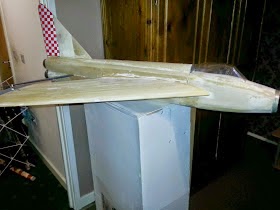 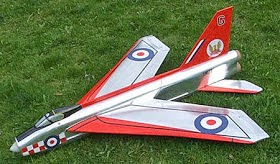 Well I have tomorrow, (Friday) off work to go flying and go to the Wales v England Six Nations Championship rugby at the Millennium stadium in Cardiff.

So in the morning I'm heading off to Fochriw, and hopefully Mark will be meeting me up there, as the conditions are looking really good for some flying.

I shall be on Fochriw on Saturday morning as well for more fabulous flying and, our new visiting friend, Andy Meade will be joining us for the day.

Andy is going to bring some of his PSS models along with him, including a SAAB Viggen, which he hasn't maidened yet. Apparently this model has a very thin wing section and weighs in at a whopping 7lbs, so he's going to need a good deal of wind to get this thing in the air. Whether we shall see enough wind for that to happen, we shall see.

Unfortunately the wind is forecast to die away into single figures for Sunday, which means Fochriw will be swarming with para gliders, so I shall give it a miss. But at least I shall be getting two days flying in.

Here is a picture of Andy with his SAAB Viggen 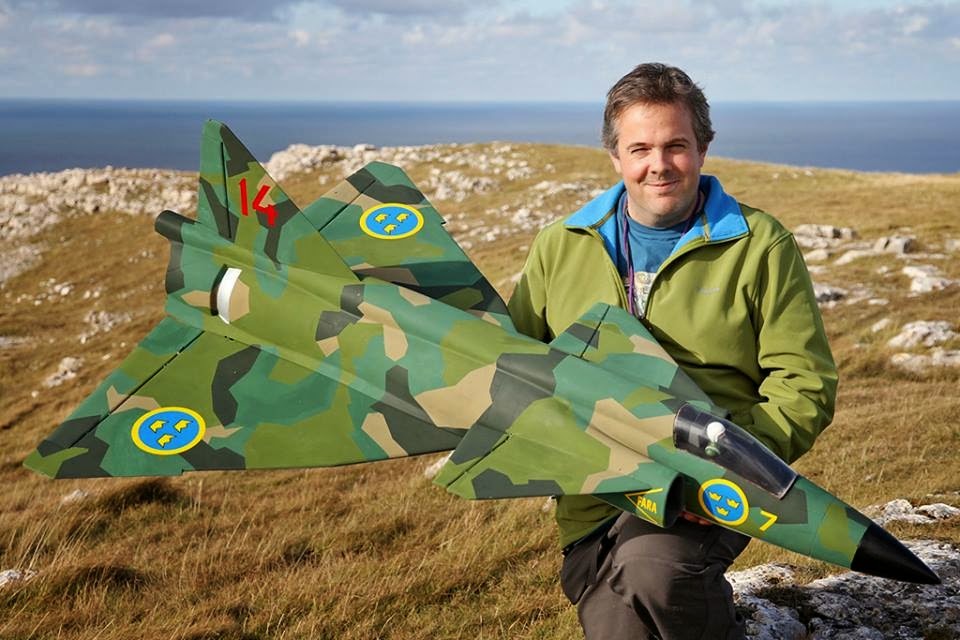 The Bwlch at its best

I couldn't make flying at the Bwlch but by all accounts the conditions were superb at the weekend.

Phil took this little bit of video with his phone.

A smashing time on Meio

I could only manage a short time flying on Meio so I took the Traceur and the Polecat with me.
The wind was about 25mph N to NW and I launched the Traceur. This plane loves stronger winds and she was flying fabulously until I pulled out of a manoeuvre a bit low, clipped the wing tip on the ground, and I bent the wing joiner.
So I launched the Polecat, but after a few quick passes, I took the plane to far left, where the slope turns to westerly, lost the lift and she plummeted out of the sky. Oooops. 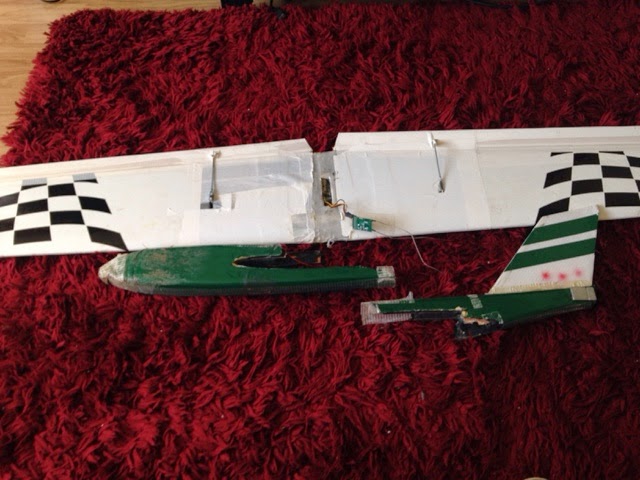