I took Michelle up Meio Common today to give her a flying lesson using my trusty Wildthing.
I was using a buddy lead with my Hitec A9 as the master and the Eclipse 7 as the slave. I used the recommended momentary switch on the A9 as the trainer switch and the model, with Michelle in control, turned towards the slope and went into a dive.
I released the momentary switch to take control but I had no response and so I ensured that the switch was indeed in the forward position but there was still no response from the stick.
The model ploughed into the ground at high speed with the damage shown in the picture.
I checked that the buddy leads were properly connected to both transmitters and that there was enough charge in the flight and transmitter batteries. So I'm currently bemused as to the cause of the apparent signal loss, which I have not experienced previously with the Hitec AHFSS system. 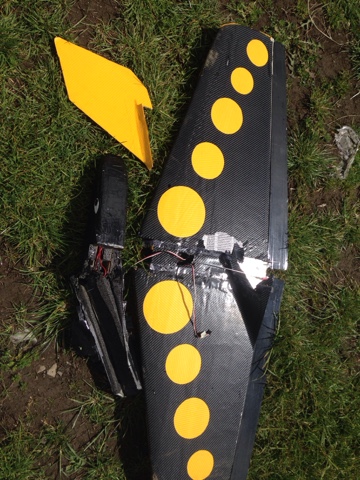 Well it's been a while since I posted, life has just been very busy and it seems I'm going to be busy until mid October with various stuff.

Firstly, I've finally managed to sort out the problem with my Hitec Aurora 9. Sometimes when I have a problem with something that I just cannot sort out, I put it away for a while and then all of a sudden I have one of those, "eureka" moments. Well this is what happened and I decided to just go through the system menu, tab by tab and see if I could spot something that wasn't right. Why I chose to click the Mode tab first I don't know, but I did, and noticed that the mode had changed from 2 to 3. Doh! How the fluff did that happen? I switched it back to mode 2 and everything was back to normal. Phew.

So Michelle and I headed up to Llandudno on Friday 12th June, a long 4 hour drive but with stunning scenery. We found the camp site, set up, then headed up to the Orme to try out the NE facing slope, the one by the dry ski slope. Unfortunately there was hardly any wind and I wasn't prepared to even chuck the Wildthing off as not even the gulls were cruising the cliff.

The forecast for Saturday was for a NE wind again, however, Tim Mackey had got up there early only to find that the wind was actually coming in from WNW, so the message was sent out and we all headed for the tank track car park.

The wind was only about 9 mph, not strong enough for PSS models, but we did manage to fly foamies and various other light wind models.

Later on in the afternoon the wind did swing around more westerly and increased a little, just enough for a couple of Jet Provosts to be launched.

Sunday saw the WNW wind back at 9 - 12mph and we did manage to have a bit of fun playing follow my leader behind Phil Cooks T33 and a couple of Mark Kettle Vulcans.

Despite the poor wind conditions,  we did have a good time and I have already booked my camping for the Llyn Peninsula fly for fun event. Hopefully I'll get to fly the Lightning this time.

Check out the video and until next time, happy flying guys.