I normally wouldn't be looking at the weekends weather forecast until Thursday, however, Nick and I had planned to pay a visit to our slope soaring friends at Slope Soaring Sussex this weekend, and so with hotel rooms to book and a three hour plus drive down there, we've been keeping an eye on the forecast all week.

The forecast isn't great with light winds of 8 - 11 mph from the south ish, and so Nick and I have discussed, and spoken with Paul down in Sussex and we have decided to postpone our trip and look at some possible dates, probably towards the end of September, when hopefully the autumn winds will have kicked in.

The forecast for S Wales this weekend isn't any better really but, it's much worse for those taking part in the PSSA fly in at the Orme in N Wales where the forecast is for a variable breeze of 1 - 3 mph, a final decision on this event will be made on Thursday. It maybe that I can get a couple of hours on Meio on Sunday for some thermal flying from the slope, we'll see. I hope so because I have a very busy August and may not get a chance to fly at all at the weekends due to running a half marathon, visiting my parents and international rugby games, Wales v England and Wales v Ireland which are "friendlies" prior to the Rugby World Cup in Japan this autumn.

So here is a video I made the last time I made the trip to fly on the South Downs of Sussex. Happy flying wherever you are.

Slope Soaring can be a lonely existence

I put a shout out on the Slope Soaring in Wales and South Wales Soaring Association Facebook group pages last Friday to see if anyone was going to be about on Saturday to join me in a spot of flying.

The forecast was for cloudy with sunny intervals and a westerly wind of 16 - 18 mph. This would give me three slope options, Rhossili which is a 90 minute drive but the best slope I've ever flown, Mickey's at the Bwlch, (the 2nd best slope I've ever flown), and Eglwysilan Common near Pontipridd. Meio also flies on a westerly, although not very well as the westerly part of the slope is where the slope transitions from south westerly to north westerly, so its curved and has a very narrow band of lift, so I was going to discount this slope straight away to fly from.

The only response to my Facebook shout out was from Nick who asked where I was going to fly although he wouldn't be able to join me anyway. My response was that if there were a few of us then I would head to Mickey's but, if I were to fly alone then Eglwysilan Common would be my choice.

There is very little in the way of car parking on the Eglwysilan road, without having to park a long way away, which is why I tend to head there if I'm flying a westerly alone, but I managed to pull in on a wide ish pull in with two wheels on the grass verge and only a short walk ahead of me. Upon arriving at my favourite spot I checked the wind speed and it was smack bang straight onto the slope and showing 16 - 20 mph. Perfect!

I launched the Genesis foamie wing and that flew fabulously with no sign of any turbulence or buffeting, so I was then glad that I'd also brought the L213 with me as I haven't flown this in weeks due to the lack of wind.

I assembled the L213 and threw it off the hill. It climbed away and there was just enough wind to perform a few aero's and feel confident that I wasn't going to have to retrieve it from the bottom of the hill. I've never weighed this model but it is quite a lump, and it will cruise in a 15 mph breeze but I don't usually like to fly it unless the wind is blowing about 20 mph, preferring to opt for something smaller or lighter for the fun factor in lighter conditions.

Many of the TX settings for the L213 were way out, so I used this session to constantly take off and land and make adjustments to CROW, Thermal and Speed flap settings, and I now think I have these dialled in just about right now.

It was very peaceful on the hill, all by myself, and sometimes the solitude can be nice. There was a couple of walkers who came along and saw me flying but I didn't realise they were there until I brought the L213 around on the base leg for finals and I saw them directly behind me, right in my LZ. Fortunately I had plenty of height and I went around again. Obviously I wasn't going to be able to land directly behind me, and the couple were obviously wanting to watch me land, even though they were completely oblivious of standing in the "danger zone", so I walked over to their left in the hope that they wouldn't move with me, which they didn't, but I took the 213 too far back on the base leg due to a lack of concentration, (keeping one eye on the model and the other on the couple), and I lost the lift. I thought I was going to tip stall and hit the ground with a bang but as fortune would have it I recovered and brought her in OK. Phew!

All in all it was an enjoyable session of flying and I managed to iron out a few of the settings bugs I had with the L213. I do enjoy flying this small, slope and it's perfect on a westerly if there are only a couple of you having to park cars. In fact I'm the only person I know who does actually fly there, others seem to go to Meio and put up with the wind being well off the south westerly slope face. 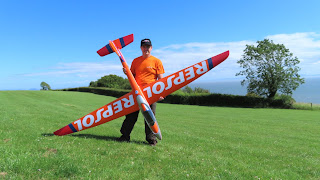 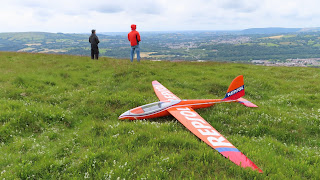 As for this weekend? Saturday is currently looking like a light north westerly up to 10 mph and Sunday, well that's a day for the DLG's or power assisted models to do some thermal soaring.
Posted by SteveH No comments: