It was a disaster darling!

Noon on Saturday saw me parked at the foot of the Meio Common slope, my intention to do some bungee flying on the flat top of the common as the wind forecast was NW and 5 - 7 mph. Once I'd got to the top of the slope the wind was minimal, but what there was, was north easterly, so I made my way over to the far side of the common.

I tried out the air by launching the Libelle, which confirmed the wind direction and so I put together the Whisper, checked out all the controls were working as they should, and set out the hi start bungee.

I attached the parachute ring to the tow hook on the Whisper and stretched out the line by 120 paces, which is tight enough for a good, steep launch but, not too difficult to hold the plane with one hand whilst you twiddle the sticks one last time before committing the plane to the air.

I gave her a good throw and she veered off to the left, something which it has done a few times before and probably the way I throw it. I immediately began to correct with rudder until my right hand could get onto the aileron stick. She straightened up but then at only about 10m above the ground, she came off the hook, banked over hard right, and spiralled into the ground nose first.

Fortunately the damage appears minimal. I thought the inner nose cone would have broken loose but it was solid. One of the V tail fins had come off but that proved to be ok. The steel wing joiner was now bent however, and I managed to remove it but it came out with the brass ferrule it slides through. I have had some issues with this ferrule in the past and a little thought will be needed to fix this back into place.

So now it was time to assemble the Elegant and give her a test fly. The last time I flew here she kept wanting to bank to the left, so I have made some adjustments which I was hoping would help.

After assembly I checked the controls and did a range check, all seemed ok except, the wind had changed direction and amazingly had swung around through 180 degrees to SW. So I wound up the bungee, collected my things together, and walked back across the common to the SW facing slope.

I decided I was going to hand launch the Elegant off the slope, and so with a good old heave ho, off she went.

She began to rise in the 5 mph breeze, to my relief but, she still wanted to bank to the left. One thing I had forgotten to do when I made my previous adjustments, was to zero the trims, doh, and so I had nothing to play with trim wise on ailerons, so I was having to hold on quite a lot of right aileron to get her to fly straight and level but, she was flying very nicely in that slight breeze.

I made a few passes further out from the slope, maintaining height, but then she began to descend slowly so I began to bring her into the slope, thinking that I could plonk her down, if need be, in front of me.

With little height I made a right turn and, as she came over the ridge, she then dropped a wing, fell out of the air and hit the ground. As I walked towards her, I realised that the shape of the fuselage was wrong and as I neared her, my first fears were realised. The fuselage had snapped about halfway between the wing trailing edge and the fin.

It is repairable and I will take a look at it at a later date, but I have other things to do first. But here is a picture of the damage. 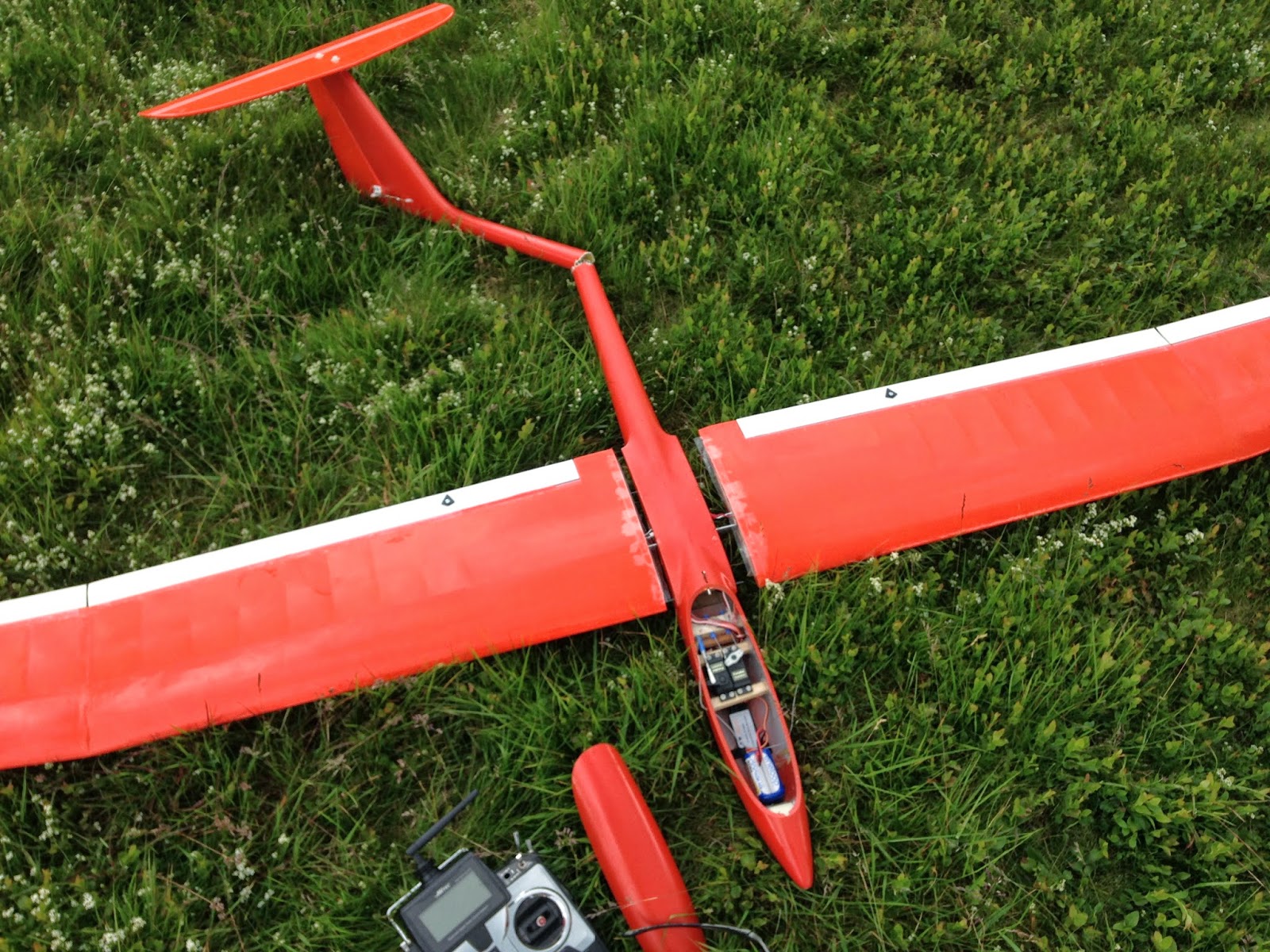