Yesterday I was up with the lark to make my trip down to Cornwall to collect a PSS Aermacchi MB339 that was up for sale.

At the same time, Phil May was headed north to Llandudno to fly at the PSSA meet at the Orme. Unfortunately, with only 54 minutes driving time left, a brake caliper seized  and Phil had to abort his journey. To say Phil was gutted is an understatement as to date he hasn't managed to visit the Orme for one of these meets. Maybe next month eh Phil?

So I arrived in Newquay to collect my model. This belonged to a local guy who passed away recently and his wife was getting rid of his models. The model was just about complete and hasn't flown yet. All I have to do from what I've seen is connect the elevator cable to the servo, fit a battery and receiver, check the COG and chuck it off a big hill next Sunday. 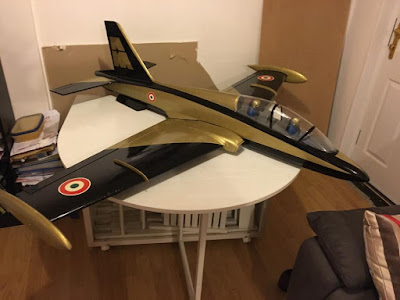 But hang on, there was another similar model there too and I was asked if I'd take that also. On close inspection, the fuselage was built of foam, whereas mine is glass fibre, and it had taken a lot of punishment as I could see it had been patched up a lot. And then I remembered I'd seen this model flying last year on another trip to St Agnes Head. 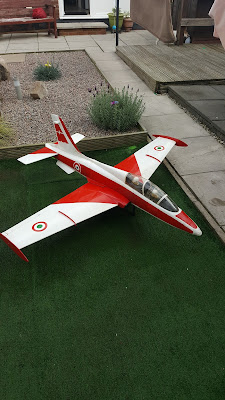 So a deal was struck for the two models which were loaded into the car and I headed off to St Agnes, about 15 minutes away, where I met up with Martin, who is a regular visitor to this flying site.

The wind was light at about 10 mph north westerly and the sun was shining as I launched the Wildthing into the smooth air of this fabulous slope.

During the day, other fliers turned up, including some visitors from Germany, along with locals James Clark and Stan Yeo of Phoenix Models. Stan has had a long career in the model glider field designing and producing EPP aerobatic glider kits. However, with a huge increase in the cost of EPP, Stan has redesigned his most popular models as balsa kits. I must buy one to build this winter.

Anyway, here is the video of me flying the Wildthing and hopefully I may have some video next week of the maiden flight of the MB339.

Until then, happy flying.
Steve