Another weekend approaches and, at long last, some decent flying weather looks like being on the cards, so hopefully I can maiden my L213 😊.

Saturday - A fine, bright day with a north easterly wind of 16 mph, so you can probably expect 25 mph plus on the slope.

Your slopes of choice will be, the Wrecker at the Bwlch, Fochriw, and although a little off face but you could try Manmoel at Ebbw Vale or Meio Common too.

Sunday - A cloudier day but dry with an easterly wind of 17 mph.

Your slope choices will be the Crest at the Bwlch, (but watch out for that rotor though as it will be severe), Manmoel or even the Garth, (which does fly well on an easterly, but car parking is pants).

I am intending flying on both days, Saturday at Fochriw, and Sunday at Manmoel. Sometimes though we get an easterly forecast and on the day it turns out to be north easterly, or vice versa, so each day will have to be played by ear.

Now that the L213 is complete, I have moved onto my next job which was to replace the covering on the tail plane of my Aermacchi MB-339 PSS model. The original covering was quite badly wrinkled and I wanted this job done before the first PSSA meet at the Orme in early April. The wings also require recovering but they will do for now anyway.

I removed the old covering last night, which was a really thick material and it didn't respond to heat, but it did come off easily enough. The new black covering went on fine although I did have to sand down the bare balsa a bit first. It didn't look like it had been sanded originally. I only have the gold trim to add now.

I noticed last night that the canopy is a bit loose also, so that'll need sticking down too. 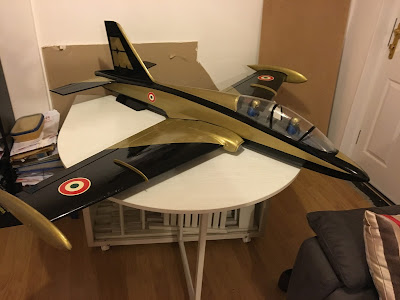 Completion of my Phoenix models Vagabond, which came to a grinding halt due to building the L213, will begin again next week hopefully. I don't envisage there being more than a couple of weeks work there. I want this model ready for the end of May when I am going away to west Wales for a week long camping trip. I hope to fly this off some of the sea cliffs there. 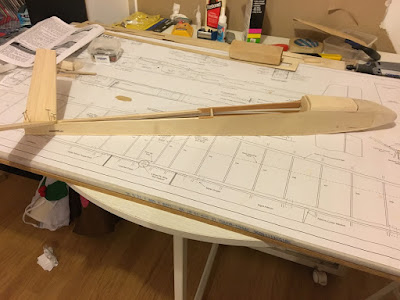 Then I have a Steve Webb models Fournier RF4 which was given to me by Paul Hampshire of Slope Soaring Sussex. This is a partly built balsa model and to complete the build phase shouldn't take to long at all. This should be a nice little model to fly from a local field under electric power, or off the slope. Hopefully mine will look something like the ones in the following picture. 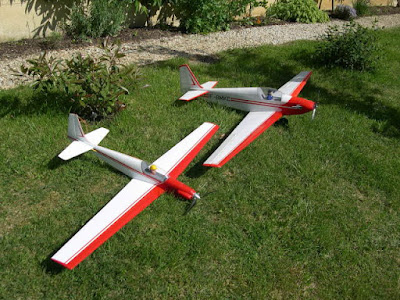 I'm wondering if this can actually be classed as PSS, as it is powered and a glider? Answers on a post card please. This will be a good model to take along to the PSS events should there be a lack of wind, which we certainly had last year.

And finally, my trusty FVK Signal is looking tired after many years of flying. I bought this from fellow local flier Chris, and he bought it on eBay, so I have no idea how old it is, but it still flies well and is generally in good condition. 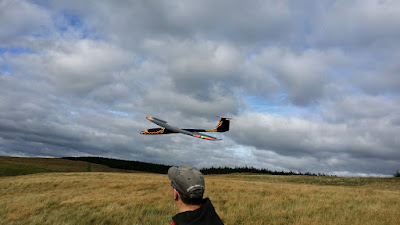 So this is going to get a complete refurb with the glass fuselage to be resprayed and the wings recovered. I'm seriously considering replacing the rather weak wing servos with the same KST units I fitted to the L213, as these are really good quality with great torque but won't break the bank.

Anyway, that is it for this week. I hope to see you on Fochriw or Manmoel this weekend.