So the project has been coming along nicely!

Tuesday evening I glued the wing into the fuselage and left it 24 hours to set properly.

Last night I attached the elevons to the wing and covered them.

I decided to try using laminate film as my hinging material and cut four pieces of 75 micron film, approximately 3" long x 1" wide for each wing, and used part of the mylar hinge method to attach these. So I stuck two pins, evenly spaced, through the centre of each tab of lam and ironed this onto the elevon, the pins butting up to the beveled edge of the elevon. I then mated up the elevon to the wing and temporarily secured it with masking tape, with the pins now also touching the trailing edge of the wing, thereby creating a small, even gap between the wing and the elevon, and then with full downward deflection of the elevon, I ironed the lam film to the top of the wing.

Next I had to do the underside of the wing, and for this I used the almost tissue thick 42 micron laminate film. This was cut into strips the length of each wing and about 1½" wide. The elevon was then raised and bent over until its top surface was touching the top surface of the wing and I ironed on the lam to the beveled elevon edge and the wing trailing edge at the same time and the excess was ironed onto the underside of the wing and the elevon. Once this was done, another similar strip of lam was cut and ironed onto the top of the wing and elevon. This seems to have made a hinge which is strong, clear, will not degrade or become brittle ....... hopefully.

I have to say that I was impressed with this method of hinging, and if after a few months of flying it is still secure and showing no signs of any issues, then I'll use this on all my future foamie model projects.

It also got me thinking about the way I build foam wing type models, and I think my next model, (that Santa is going to bring me), will follow the following build procedure.

This should create a really strong and rigid model.

I then covered the elevons with the iron on film to finish the evenings work.

All I have left to do now is to create a little more space in the battery and receiver compartments to accept those items as currently there isn't enough space for those and the corresponding wires. I have to fit new elevon control horns and connect them to the servo arms, and add some orientation bands of iron on film to the underside of the wings, then Bobs your uncle, it's finished.

I can't wait to chuck it off a hill this weekend now. 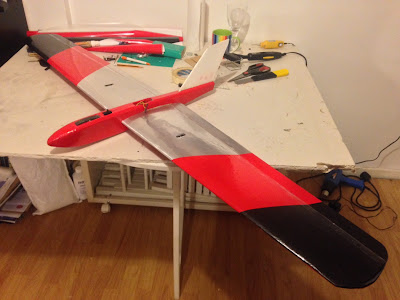 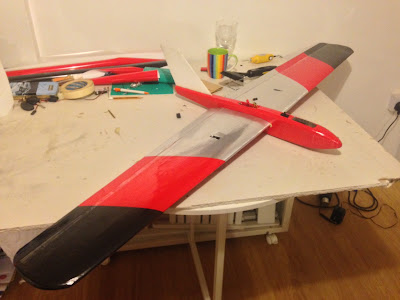