Me 109 completion and maiden flight.

So as mentioned at the end of the last part of the build blog, I started to paint the now pretty much completed model.

Some minor detailing has been added with some 3D printed parts.... a scale spinner, a pair of exhaust manifolds and a super charger intake  (thank you Andrew Meade) also I've included a scale WW2 Luftwaffe pilot bust.
Non-functioning tail support struts have also been fitted. 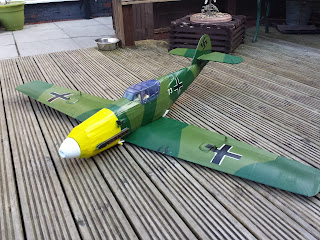 Balancing and setting up .

When it came to balancing the 109 I needed to add approx 160g of weight up front.
In my true cheapskate building method  (and the fact I'd run out of lead) I used chippings from my garden which fitted nicely between F1 and F2. Once test flown I poured 2 pack epoxy over them to hold them secure. This brought the all up flying weight to 1.6kg....Heavier than expected to be honest.

Aileron  throws were maxed out on high rates, approx 20 mm and 12mm on low rates.
Elevator travel was again maxed out on high rate and 50 % on low rate, one thing must be noted is that too much elevator travel can force the horizontal stabilizer to bed so I set the adjustment to the point where it starts to bend and then back off until there is no distortion in the tail,

I tend to fly with a fair bit of expo so added 30% on both ailerons and elevator.

The day I planned for the test flight the chosen slope was Abertysswg, which is a few miles East of Merthyr Tydfil.
Wind was light and far from ideal for a maiden, so we gave it a couple of glide tests on top of the slope which went pretty much perfect, straight and true.
We did try one flight but straight away I knew there was not enough lift and brought it  around for landing. 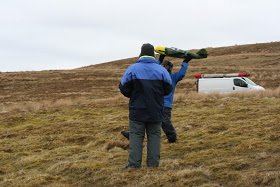 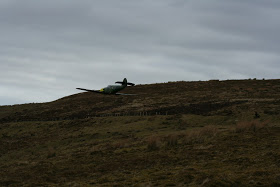 So a couple of days later Josh my son and I met up with Mark Williams at Manmoel, which is above Ebbw Vale.
Conditions were better with wind speed approx 25mph with plenty,  but very turbulent lift.

After a couple of flights with another model that I was comfortable I decided to give the 109 another go, this time there was no excuses.
Mark gave it the old heave-ho and out it went, it was being thrown about a bit by the afore mentioned turbulence and was not helped by the fact I had set up the expo wrong which made it super sensitive to aileron!!!
It flew pretty well considering and after landing I corrected the expo issue and had a couple more flights with it later on in the day, these were significantly better but still buffeted about by the turbulence.

Here's a brief video of the maiden flight filmed with a phone so not the best quality I'm afraid.

Since the day of the maiden flight it has had a couple of successful outings, both at Fochriw (oh boy I love that name...) which is a perfect park and fly NE facing slope with only one problem, the Para-gliders on lighter wind days. 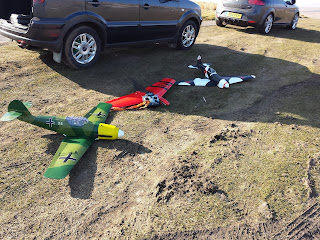 Well that just about wraps up the  blog on this Me 109 build and if anyone is still reading it...thanks guys.