So the next job was to cut and sand the wing tips to shape. 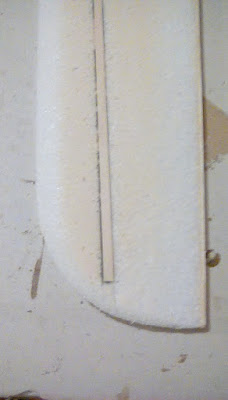 Then I had to fit the rear carbon spar. This was achieved by measuring 3" down from the main spar, laying the rear spar on the foam and drawing the outline of the spar onto the foam. I then used a blade to cut the outline and a router type tool to remove the foam. I chose to use Gorilla glue instead of epoxy to glue the spar in place. The instructions say to use epoxy and then use scraps of balsa to fill any gaps, but by using the GG the glue filled any gaps instead.

The next job was to decide where to fit the servo's. The instructions recommend they are mounted up against the main spar, which makes sense! So I marked the foam and routered it out until the servo's, when fitted, were flush with the top surface of the wing.

The servo's were then potted. I mixed up some epoxy and used just enough the cover the walls and bottom of each servo bay. The servo was then placed in a polythene sandwich bag and pushed into the tight fitting bay and left to set. The servo was then taken out, removed from the bag and then I wrapped the servo in masking tape and secured the servo in place with a blob of hot melt glue. The instructions say to fit the servo's so that the servo arms and control rods lay UNDERNEATH the wing. I have to say I do not like this idea. I guess it's fine if you are landing on a crown bowling green, but very few slopes are that smooth. Most of the UK forum builds I've looked at have put the control rods ABOVE the wing, and that is what I have done. This has meant I have had to take the servo wires over the top of the spar, but they should be ok.

So that is the wing now completed and ready to be mated with the fuselage, which will happen one I have made the RC component bay, which is my next job. 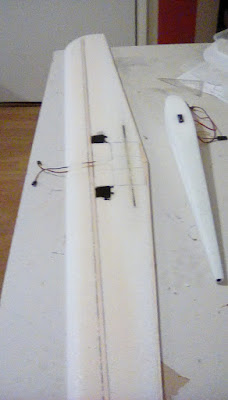