Saturday was forecast to be the best day weather wise to fly, with a southerly forecast, so I headed up to the Bwlch and arrived just as Mark and Mike were walking over the brow to Back of Wrecker.

I was only intending staying an hour or two so I only took a couple of foamies, my new Moth being one of them. Well, it had to have it's maiden flight at sometime, and although Back of Wrecker isn't the best of slopes, I decided to give it a chuck.

I won't say anymore about how it went now as I took some video which needs editing before I can put it on here, so I'll write up the whole story later when I include the video. Here's a picture to keep you going though. 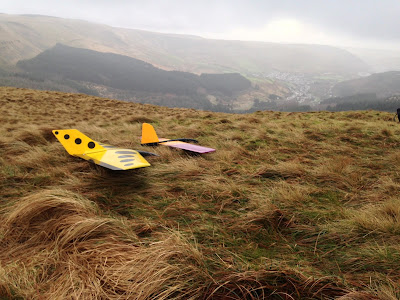 Sunday morning and Mark, Wayne and myself headed to Meio Common as the wind was forecast as light south westerly.

When I arrived, Mark was already there but thick clag covered the hill, so we stood around chatting for an hour hoping the clag would clear. Wayne turned up and we must have waited another 30 minutes before it looked like we may be in luck and headed up to the top of the hill.

Once at the top, the clag was thinning but coming and going, so Wayne and I chucked our Wildthings up and began doing a bit of VTPR style flying, just about keeping the models out of the clag.

Shortly afterwards, the clag cleared and I stayed for about an hour having a bit of fun chucking the foamies about.

Whilst we were stood by the cars chatting, the local farmer came along, stopped and chatted to us. He was saying that the Common had been sold to a private buyer for a fee of £40k and the farmer thinks the buyer is going to have wind turbines put on top of the hill, which will bring him an income.

Initially this sounded as if it could have disastrous consequences for our flying, as Meio is probably the slope that we all fly the most. But on reflection, it may not be that bad.

The top of the hill has a vast flat area, so there is plenty of space to put turbines, so I doubt they will be placed that close to the ridge line and affect us flying. And in fact, to get the turbines up there and be able to maintain them, a road would have to be built, so that could be very advantages to us. We shall wait and see.