So the last job to do on the assembly side is to make and fit the fin.

The kit provides two pieces of balsa which have to be glued together. Then the supplied template is laid on top and the balsa cut to shape. The template shows where the balsa join line should be and the direction in which the wood grain should run. Simple!

Except it wasn't simple! I laid the the balsa on top of the template to gauge the position of the grain and join line. 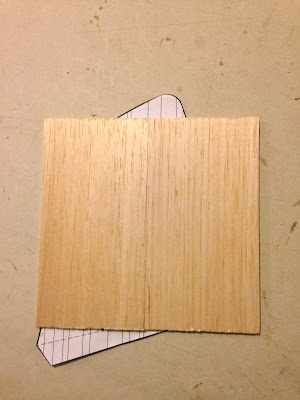 As you can see, there was more template than balsa. So I tried another way. 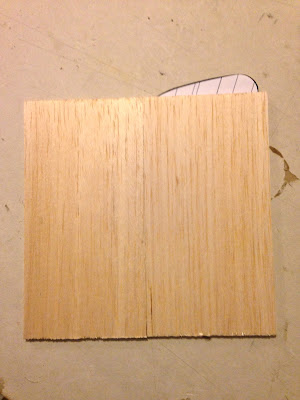 Nope, that wasn't going to work either. So it appears that NCFM have provided an incorrect size of balsa. And yes, the template did print at the correct size because it also included the wing tip template, and that was perfect.

So my choices were to use the supplied balsa, make the fin smaller and with the grain running vertically instead of at an angle or, make a new fin out of my own stock of balsa sheet. And that was what I decided to do. 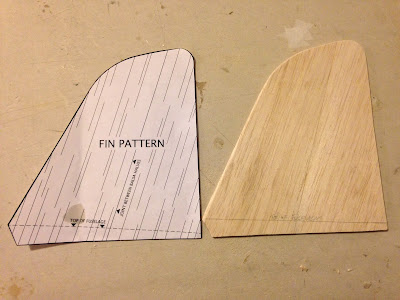 And this is how it should have turned out with the supplied balsa.

So with the fin made, the next job was to cut a groove in the top of the fuselage for the fin to sit in. I measured and then used a blade to cut through the X weave tape and foam all the way down to the carbon longeron before widening the cut with a router type tool.

I then mixed up some epoxy and smeared the walls and floor of the groove with the glue. The fin was wrapped in a plastic bag and then inserted into the groove and left it there whilst the glue set.

I removed the fin and plastic bag from the groove and just added a strip of 1" (25mm) X weave tape along the bottom of the fin before inserting it back into the groove.

The fin isn't meant to be fixed in place, in case it has a mid air collision or dodgy landing, in which case the fin can be easily replaced. But the instructions do say you can use some clear tape just to ensure the fin remains in place during normal flying. 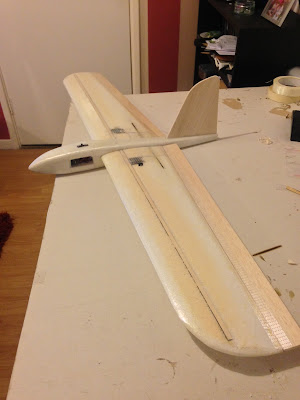 So the build/assembly stage is now complete and I'm ready to begin covering.